The Israeli military has so far completed the construction of 11 kilometers of a 130-kilometer-long border wall with Lebanon, a construction project Beirut has condemned for violating its sovereignty.

The nine-meter-high wall will extend from the Mediterranean Sea in the west to the area around Mount Hermon in the east, according to Israeli military officials. It is expected to cost 1.7 billion shekels ($473 million).

The wall will be equipped with sensors, surveillance cameras, information collection centers and warning systems.

“We will build our glass fence with steel pillars and steel mesh. There will be cameras also above the wall that we can see above the wall,” said Brigadier General Eran Ofir, commander in charge of Israel’s border wall projects.

Lebanon says the wall construction violates its sovereignty by passing through territory that belongs to the country but is located on the other side of the UN-designated Blue Line, which sets the limits for Israel’s withdrawal from southern Lebanon in 2000.

Israeli officials claim that the wall runs inside Israeli-occupied territory.

On Wednesday, a senior Israeli military officer said, “Hezbollah has been gaining strength in Lebanon in recent years and is virtually in control of the Lebanese army. Hezbollah also upgraded its capabilities through its fighting in Syria and gained confidence in the fighting, but today it can’t enter Israeli territory with large forces and hold the ground.”

“We are prepared for the possibility that they will surprise us,” the Israeli officer said.
Israel waged two all-out wars against Lebanon in 2000 and 2006 but fell short of its military objectives in both cases in the face of strong resistance by Hezbollah and the Lebanese army. 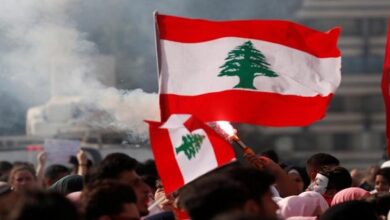