Iranian security forces have arrested 27 members of a terrorists group before they could carry out any acts of terror in the country.

According to a statement by Iran’s Intelligence Ministry on Monday, Iranian security forces managed to identify and arrest the terrorists, who were planning to create insecurity and carry out acts of terror in the capital, Tehran, and some other cities during the holy month of Ramadan (May 17-June 14) and the International Quds Day, which was observed on June 8.

It added that the terrorists had already published pictures on the Internet and threatened the Iranian people with murder and revenge but they were all nabbed after a series of police and intelligence operations.

The ministry noted that a large amount of weapons, including Kalashnikov rifles, grenades, bombs, Colt firearms and explosive materials, were also confiscated from the terrorists in the operations.

Commander of the Islamic Revolution Guards Corps (IRGC) Ground Force said on Sunday that his forces have disbanded two more terrorist groups in the northwest of the country near the border with Iraq over the past 24 hours.

Brigadier General Mohammad Pakpour said that forces of the IRGC Hamzeh Seyed al-Shohada Base managed to destroy the terrorist teams that had made desperate attempts to infiltrate into the country.

The public relations office of the Hamzeh Seyed al-Shohada Base said in a statement on Saturday that the IRGC forces destroyed a nine-member gang of terrorists in the northwest of the country.

It added that the forces killed all members of the terrorist team “tied to global Arrogance” in the Oshnavieh border region on Friday evening. 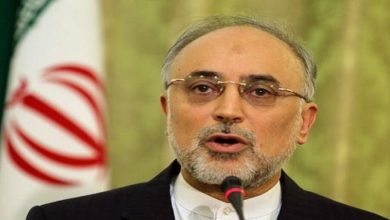 US sanctions AEOI and head of Iran’s Atomic Energy Organization

Trump’s ban on Muslims entry will harm US: Iran