Several journalists rallied near the Ministry of Information in Beirut on Friday afternoon, to protest the Special Tribunal for Lebanon’s summons of al-Jadeed TV and al-Akhbar newspaper’s journalists on charges of “contempt and obstruction of justice.”

The STL announced on Thursday that it has summoned Karma Mohammed Tahsin al-Khayat from al-Jadeed, as well as the station’s parent company New TV S.A.L., to appear before it on two counts of Contempt and Obstruction of Justice.

Ibrahim Mohammed al-Amin from al-Akhbar, as well as the newspaper’s parent company Akhbar Beirut S.A.L., have been summoned on one count of ‘Contempt and Obstruction of Justice’.

Al-Khayat and al-Amin both stressed during the protest that they will not stop publishing “what has to be published,” calling on the Minister of Information to resign.

It is worth noting that the ‘accused’ may choose whether to appear at the court in person or by video-link and that the initial appearances of the accused are scheduled for May 13, 2014.

Hezbollah slams Bahraini govt over accusations of being linked to bombings 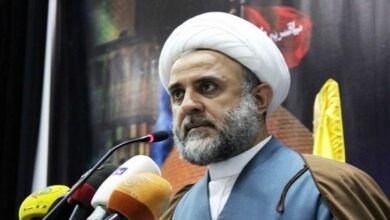