Commenting on the Zionist crimes against the Palestinian prisoners and most recently the martyrdom of prisoner Maysara Abu Hamdiya in “Israeli” jails, Hizbullah issued the following statement:

The Zionist crimes against Palestinians escalate day after day, and its most recent victim is prisoner martyr Maysara Abu Hamdiya, who passed away due to the negligence of “Israeli” prison officials.
Despite his age and illness, he did not get neither the appropriate treatment nor the chance to be released, which makes him suffer as twice as other victims of imprisonment and permanent Zionist intransigence.
Meanwhile, it is pity that the Islamic and Arab nations are unfocused on the Palestinian issue and the human calamities caused by the Zionist occupation.
In parallel, the issue of Palestinian detainees is absent from the concerns of our regional rulers, who pay no attention to the struggle of Palestinian prisoners, despite their protest movements.
Topping the list of these movements is the empty-stomach battle, with its first hero Samer Issawi nearing death, while his patient brethren continue their hunger strike.
Also astonishing is that the involved international organizations have not duly fulfilled their duty to protect the humane and legal rights of the prisoners and detainees in the Zionist jails.
They failed even to condemn “Israeli” policies that violate the international law as well as the Universal Declaration of Human Rights.
This raises questions about the responsibility of these institutions in the assassination of the martyr Abu Hamdiya and other martyr prisoners in the occupation prisons.
As Hizbullah expresses its full solidarity with the aspirations of the Palestinian people, it strongly condemns the Zionist atrocities against the Palestinians, their holy places and detainees.
The party further hopes that the martyrdom of detainee Abu Hamdiya would motivate resistance against the Zionist occupation.
There is great hope that the uprising associated to the announcement of Abu Hamdiya’s martyrdom forms the first torch to the beginning of a new Intifada against the occupiers in all of Palestine.

Hezbollah: Israel won’t be allowed to set rules of conflict in Syria 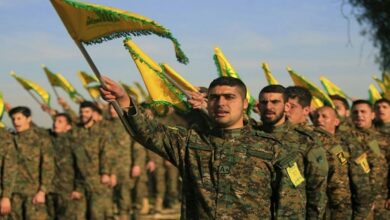