Thousands of Lebanese Shia Muslims have held ceremonies in commemoration of the martyrdom anniversary of Imam Hussein (PBUH), the grandson of Islam’s Prophet Muhammad.

Shias marched through the streets of Beirut’s southern suburbs on the day of Ashura, and mourned the martyrdom of the third Shia Imam and his 72 companions.

Many gathered in the southern town of Nabatieh, which usually holds the largest Ashura rituals in Lebanon. Men, women and children also listened intently as a preacher recounted the story of the prophet’s grandson and the suffering he went through in the Battle of Karbala.

Security forces, on a heightened state of alert after reports of a possible attack on mourners, prevented vehicles from entering the town, which is situated 57 kilometers (35 miles) south of Beirut.

Ashura rituals also took place in the cities of Tyre and Bint Jbeil in southern Lebanon on Sunday.

The ceremonies commemorating the martyrdom of Imam Hussein and his loyal companions reach their climax on the Day of Ashura — the tenth day of the Islamic lunar month of Muharram.

Ashura marks the anniversary of the day in 680 CE when thousands of forces loyal to the despotic Umayyad caliph Yazid ibn Muawiyah martyred the prophet’s grandson and his followers in Karbala, Iraq.

Sayyed Nasrallah to Appear in Interview with Al-Manar Friday 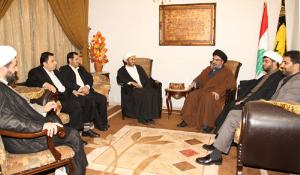