Hezbollahâ€™s Deputy Secretary General Sheikh Naim Qasim said that the party will avenge resistance leader Imad Moghniyehâ€™s assassination by Israel at the right time, way, and place. Martyr Ammad Moghniyeh was assassinated by the Israeli Mossad in Damascus in February 2008. “The Zionists believe in our credibility, and we have noticed that they been haunted by this apprehension as they are applying different measures, threatening, and intimidating in fear that the revenge may happen at a timing they don’t desire and with results they can’t tolerate,” said Sheikh Qasim in an interview with Al-Intiqad lebanon weekly. Â  Sheikh Qasim said that Israel will not wage war on Lebanon in the near future but stressed Hezbollahâ€™s preparedness to confront any potential aggression at any time by Israel. His eminence added that neither Hezbollah, Syria, Iran, nor Hamas will initiate war stressing war decision and war making has always been Israelâ€™s.Â  On the other hand, Qasim ruled out an imminent war with Israel as he reiterated readiness and preparedness “even if the war starts tomorrow.” 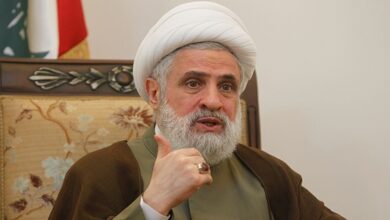