A high-ranking official with the Lebanese Hezbollah resistance movement has dismissed US President Donald Trump’s controversial proposal for “peace” between the Israeli regime and Palestinians, dubbed “the deal of the century,” stating that the initiative obliges the Palestinians to bequeath their own land.

“The so-called deal of the century is a stillborn plan ever since it was released [in late January], because it is unilateral and part of the international injustice campaign against Palestinians. Palestinians’ united front together with international consensus will frustrate the proposal,” Hezbollah Deputy Secretary-General Sheikh Naim Qassem said as he addressed a virtual forum called “United against the Deal of the Century and Annexation Plan” on Saturday.

“Since the Occupation set foot on the land of Palestine, with British sponsorship and supervision, division has been pervasive, and Palestine and the entire region has lived in a state of turmoil, confrontation, aggression and criminality,” he said.

The senior Hezbollah official added, “It has been the resistance of the Palestinian people and the sacrifices of their martyrs and fighters that have prevented the demarcation of the borders of the usurping regime, and safeguarded the rights of Palestinian generations.”

“It is now a proven fact that Israel does not have the ability to survive, and that its existence depends merely on international injustice and support of the United States and major powers,” Sheikh Qassem added.

Sheikh Qassem then called for unison among all Palestinian political factions, saying, “Israel cannot achieve what it wants when the ultimate goal is to resist occupation and liberate Palestine.”

The deal of the century envisions Jerusalem al-Quds as “Israel’s undivided capital” and allows the Tel Aviv regime to annex settlements in the occupied West Bank and Jordan Valley. The plan also denies Palestinian refugees the right of return to their homeland, among other controversial terms.

Trump’s plan has triggered waves of protest around the globe.

Many Palestinians believe the Israeli plans to annex one-third of the already illegally occupied West Bank, including parts of the strategic Jordan Valley, is only a formality and a de facto Israeli occupation of their land has been under way for many years.

“Israel’s annexation plan has been in process since 1967,” said Salah Khawaja, coordinator of an anti-occupation campaign called the Popular Committee to Resist the Wall and the Settlements.

“Israel has since built settlements and the wall. And so, annexation has been ongoing for a long time,” he added.

Elsewhere in his remarks, Sheikh Qassem underlined that Hezbollah has greatly developed its defense capabilities since the Israeli military’s 33-day war on Lebanon in the summer of 2006, and that the Tel Aviv regime is well aware of such a fact and avoids any new confrontation with the resistance movement.

He noted that Hezbollah and its allies will confront US pressures which are aimed at creating a political vacuum in Lebanon, and will thwart efforts seeking the resignation of the incumbent Lebanese government.

Sheikh Qassem said Hezbollah has drawn up plans in case the US administration decides to tighten the economic siege on Lebanon. “Ultimately, we will emerge victorious,” he said. 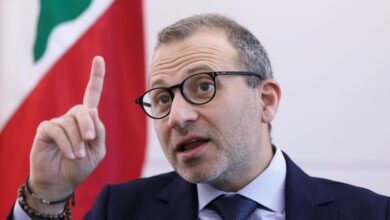 US to Impose Sanctions on Gebran Bassil for Ties with Hezbollah: WSJ