“Iran will not recognize Israel. We still emphasize that Israel is a usurper and occupying regime and we will not come along with it,” Velayati said in a meeting with a religious delegation from Pakistan in Tehran on Saturday.

He expressed pleasure that the western states’ plots to make the Muslim states recognize Israel have failed, and said, “The Islamic countries have not recognized it and the Palestinian people’s fight should continue until they regain their territories.”

After reopening the British embassy in Tehran on Sunday following four years of strained relations between the two countries, British Foreign Secretary Phillip Hammond claimed in an interview with the British media that the current Iranian government had displayed a more nuanced approach than its predecessor to a long-running conflict with Israel.

In relevant remarks on Wednesday, the Iranian foreign ministry rejected Hammond’s recent remarks, stressing that the Zionist regime had no place in diplomatic talks between Tehran and London.

“We have rejected such media hype (before) and during Mr. Hammond’s trip to Iran, we just discussed potentials of bilateral relations, fighting extremism and terrorism, etc.,” Foreign Ministry Spokeswoman Marziyeh Afkham told reporters in Tehran.

“There were no talks on the Zionist regime and the report that Iran has changed its position is denied,” she stressed.

Also on Tuesday, Iranian Parliament Speaker’s Adviser for International Affairs Hossein Sheikholeslam blasted Hammond for his interfering remarks, and said Tehran’s positions against Israel have not changed at all.

“Our positions against the usurper Zionist regime have not changed at all; Israel should be annihilated and this is our ultimate slogan,” Sheikholeslam told reporters in Tehran.

Friends of Syria Conference: National Dialogue Only Solution to Crisis in Syria 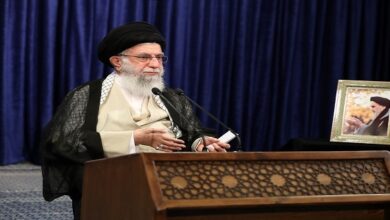 Ayatollah Khamenei described US govt as a model of true failure