Saudi state oil giant Aramco said Wednesday it is buying a 70 percent stake in petrochemicals behemoth SABIC, in a deal worth $69.1 billion.

“Saudi Aramco today announced the signing of a share purchase agreement to acquire a 70% majority stake in Saudi Basic Industries Corporation (SABIC) from the Public Investment Fund of Saudi Arabia, in a private transaction for… $69.1 billion,” Aramco said in a statement.

Saudi Arabia had sought to raise billions of dollars through a historic Aramco public offer to diversify its oil-dependent economy, but the plan has suffered a series of delays.

Observers see the acquisition of a controlling stake in SABIC as a complex alternative to raise much-needed cash for the Public Investment Fund (PIF), the kingdom’s top sovereign wealth fund.

“This is a win-win-win transaction and a transformational deal for three of Saudi Arabia’s most important economic entities,” PIF managing director Yasir al-Rumayyan said in the Aramco statement.

SABIC, Saudi Arabia’s largest publicly listed company, is said to have a market capitalization of around $100 billion — the same amount the kingdom had sought to raise from Aramco’s IPO.

The PIF, which hopes to control more than $2 trillion by 2030, is involved in a host of big-ticket global investments, buying a stake in Uber and pumping cash into a planned $500 billion mega city in the kingdom’s northwest.

Saudi Jails 14 for Plans to Attack US Forces in Qatar 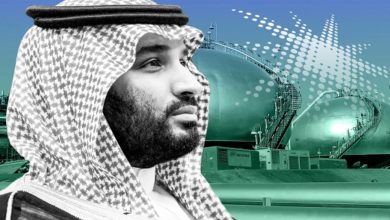