At least 8 Sunni Bralevi Muslims including two women – were killed while 80 others sustained injuries when Lahore Police launched a crackdown on the supporters of Pakistan Awami Tehrik’s Dr Tahirul Qadri on Tuesday.

The fight started last night when members of Pakistan Awami Tehreek (PAT) tried to stop police from removing barriers outside their leader’s house in Model Town Colony and party secretariat. Police baton-charged and shelled the demonstrators for not letting them do their job. PAT leaders told the Shiite News that police established barriers there on the order of Lahore High Court and now they were trying to remove the barriers in a bid to punish the party for its opposition to Saudi-backed government of the PMLN in Islamabad and Punjab.

Many protesters were also arrested for creating trouble. The injured were shifted to a hospital for medical assistance. According to hospital sources, the injured also included 17 police personnel.

Police today managed to remove all the barriers despite intense opposition, while anti-encroachment officials are busy clearing the area and removing the rubble. Police personnel are present in the locality to monitor the work and ensure protesters are kept under control.

As per previous court orders, blocking streets for security reasons is not allowed and police should remove such blockages. The Minister Rana Mashoud said the road blockages outside Qadri’s house were being removed on complaints filed by the residents of Model Town Colony.

Punjab Law Minister Rana Sanaullah, while speaking to the media in Lahore, said that the barriers outside Qadri’s house and party secretariat were removed after government received information from intelligence agencies about the presence of armed men in the area. He added that the private militia had made it a no go area and no one in Punjab is allowed to do so.

While speaking inside the Punjab Assembly, where the opposition members protested against the use of force, Sanullah claimed the police action was inevitable as they were reports of militiamen taking oath for working on an unidentified operation.

The law minister further said the provincial government will carry out a judicial inquiry into the incident and those found guilty of unlawful actions will be punished.

Informing the assembly about cases being filed against a few senior PAT leaders for their involvement in the clash with the police, Sanaullah claimed that police were fired at from inside the PAT secretariat.

Responding to the use of force against his party workers,  Qadri said he protests police brutality against the “peaceful” demonstrators.

He further accused the government of using this issue to divert attention from the ongoing operation in North Wazirisitan. Qadri said the police action was unjustifiable as the barriers were placed on government’s order many years ago.

Accusing police of harassing PAT supporters prior to his visit to Pakistan, Qadri stressed he will arrive in the country as scheduled. The PAT leader also claimed the total number of casualties was higher than the official figure.

PAT supporters staged protests in different parts of the country including Islamabad, Rawalpindi, Faisalabad and other cities.

Protesters blocked roads in the twin cities, affecting the flow of traffic. A human chain was formed in Gujranwala while party members also demonstrated in Sialkot, Hafizabad and Multan. 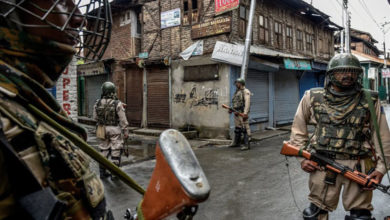