Sunni Tehreek’s leader Faheem ud Din Sheikh talked to Shiite News correspondent and said that Pakistan was established after a long struggle and huge sacrifices by Ulema of Ahl e Sunnat. If Banaras Sunni Conference had not held in 1940 and if our religious scholars like Moulana Abdu l Hamid Badayuni, Shah Abdu l Haleem Meerathi, Peer Jama’at Alishah and other Sunni scholars had not announced their support for Quaid e Azam Muhammad Ali Jinnah (rh), the dream of establishing Pakistan could not have been achieved. History is evident that when Allama Iqbal presented the idea of Pakistan, he visited Hazrat Mian Sher Muhammad Sharqprui in Sharqpur Sahreef and prayed there. Pakistan is the result of our scholars’ prayers and sacrifices.

Al-Qaeda, Daesh, Lashkar e Jhangvi, Tehreek e Taliban and other banned terrorist organizations are adventitious who work on foreign agenda under the name of Islam. They have ruined Islam’s image in the whole world including Pakistan. Pakistan has the majority of Ahl e Sunnat people who raises the slogan of ‘Ya Rasool Allah (PBUH)’ and believe in Shrines (Mazaarat). These foreign forces use the name of Ahl e Sunnat in order to deceive innocent Sunnis and to get their sympathies which is against the law and Ahl e Sunnat. Ahl e Sunnat Ulema, especially Pakistan Sunni Tehreek, have exposed their real faces and now people have recognized them. This is the reason that these adventitious terrorists are getting weaker day by day, in our country. Operation Zarb e Azab has not only broken their backs but has also failed their anti-Pakistan and anti-Islam plans. Today, people know that those who were against the very establishment of Pakistan are the ones involved in terrorism. These anti- Pakistan and anti-Islam forces can wiped off through education, perceptiveness and through the power of pen and Ahl e Sunnat Ulema are continuously working on it. 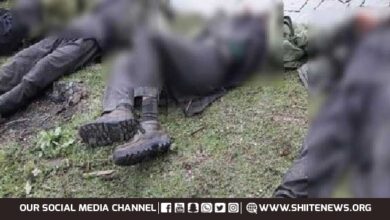