Hezbollah officials reiterated on Monday the necessity to give a change to the Saudi-Syrian efforts to resolve the Lebanese crisis through constitutional institutions, warning at the same time against the repercussions of â€œwrong considerations.â€In this context, the head of Hezbollah Executive Council Sayyed Hashem Safieddine stressed that the Resistance was convinced it would emerged as victorious out of Â any upcoming challenge.Speaking during a religious ceremony at the southern town of Ghazieh, Sayyed Safieddine said that the Resistance was aware of its strengths and was working to safeguard them.For his part, the head of the Loyalty to the Resistance parliamentary bloc MP Mohamad Raad called on the March 14 forces to reconsider their political choices.Speaking during a religious ceremony at the southern town of Kfarremman, Raad warned against the negative repercussions of â€œwrong considerations.â€We are not intimidating anyone, but it is only normal that things will deteriorate and threaten the state stability,â€ he said.Meanwhile, State Minister Mohamad Fneish said that the awaited indictment in the assassination of former Prime Minister Rafiq Haririâ€™s case would only be another uncovered attempt to defame the Resistance and tarnish its image.
Speaking during a religious ceremony held in the southern town of Adshit, Fneish wondered about the repercussions of the mentioned indictment on the internal scene.
Fneish said the national opposition will not debate any issue in the cabinet before the false witnesses has been finalized. â€œWhen the Opposition calls for internal consensus before issuance of the indictment, it is because of its keenness on the interests of this country and its stability,â€ he pointed out.Member of the Loyalty to the Resistance parliamentary bloc MP Hasan Fadlallah stressed, in the meantime, that the Saudi-Syrian effort to resolve the current crisis was still ongoing despite all rumors.Speaking during a religious ceremony held in the southern town of Kaakaaieh Al-Jisr, Fadlallah expressed hope the Saudi-Syrian efforts would be met with Lebanese steps through the constitutional institutions.He stressed the necessity not to bet on the indictment to be released by the Special Tribunal for Lebanon, emphasizing that the Resistance has already exceeded it.Fadlallahâ€™s colleague in the Loyalty to the Resistance bloc MP Ali Fayyad said in turn that “we have reached the final stage â€¦ after we waited a long time and spared no effort to reach an understanding.”
Tags
Hezbollah to March 14: Reconsider Your Political Choices!
December 14, 2010
1 2 minutes read
Facebook Twitter LinkedIn WhatsApp Telegram Viber Share via Email Print 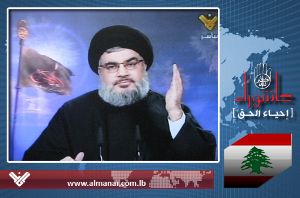 Syed Nasrallah on WikiLeaks: We Will See Greater Conspiracies