Hezbollah â€œwas said to have deployed up to 5,000 fighters along the Lebanese border with Israel.â€ US newspaper , The World Tribune reported on Monday.

The Israeli military has collected evidence of a massive Hezbollah operational presence in Shia villages along the Israeli-Lebanon border.

The party operatives, engaged Â mostly in reconnaissance, â€œwere said to be based in homes, schools and hospitals,â€ the daily added.

According to a report published in Israeli newspaper Haaretz on July 7, Hezbollah has an arsenal of some 40,000 short and medium range rockets stored in towns and villages south of the Litani River, with many of the weapons stored in private houses in South Lebanon towns bordering Israel.

â€œHezbollah is establishing itself with increasing strength in the villages,â€ Merli said. â€œEvery day they are engaged in digging, building and laying communications infrastructure to prepare themselves for war.â€

During an interview with Al-Manar television on July 9, Hezbollah MP Walid Succariyeh said the Israelâ€™s reports on Hezbollahâ€™s arms depots in South Lebanon â€œcould only be believed by naive people.

â€œ The report is a lie fabricated by Israel,â€ the MP said, adding that Tel Aviv will not likely attack Lebanon â€œbecause it is aware it will be defeated.â€ 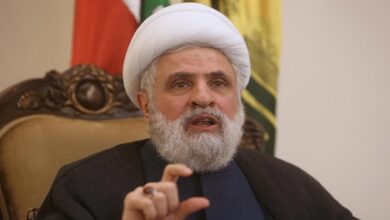 Fneish to Mikati: Ayoub Drone Op. Did Not Breach Res. 1701