Lebanon’s Hezbollah resistance movement says it is fully prepared for any future Israeli attack, warning Tel Aviv of disastrous consequences of another conflict.

The movement’s Deputy Secretary General Sheikh Naim Qassem said on Wednesday that Hezbollah stands ready for a confrontation with Israel and knows which locations to target if Tel Aviv wages another war on the country.

“We now hold a large and precise bank of Israeli targets, and Israel will have to pay the price for any step it takes,” Qassem told the Arabic-language Al Nahardaily.

“Hezbollah has worked to develop its readiness to rise to the challenge should it arise, and we can safely say that in the past four years we have prepared ourselves far more than Israel has,” AFP quoted Qassem as saying.

The Hezbollah official, however, went on to dismiss speculations about the immediate danger of war, explaining that the movement’s readiness “does not mean that war is near.”

The remarks come after earlier in July, Israel’s military released a number of maps and aerial photographs showing that Hezbollah has moved most of its weapons to southern Lebanon near the Israeli border.

The publication of the “valuable intelligence information” is widely believed to be aimed at demonstrating Israel’s surveillance capabilities while preparing public opinion for a future war.

Meanwhile, Hezbollah has reacted to the Israeli claim that the movement is preparing for a war, dismissing the report as a “lie.”

Israel fought a 33-day war against Hezbollah in the summer of 2006 to destroy the military power of the Lebanese resistance.

Tel Aviv eventually suffered a crushing defeat and was forced to leave the region without achieving any of its objectives.

The conflict destroyed most of Lebanon’s infrastructure and claimed the lives of more than 1,200 Lebanese — mainly civilians — and more than 160 Israelis — mostly soldiers.

Sheikh Naim: Hezbollah not expecting war with Israel for summer 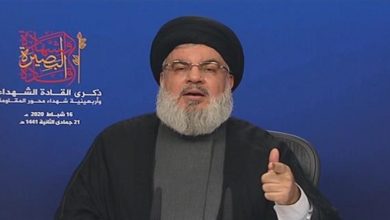 Nasrallah: Trump Administration Most Arrogant, Corrupt in US History