Hezbollah Secretary General Seyyed Hassan Nasrallah has called for the formation of a “Freedom Flotilla II” to break the siege of Gaza.

“There is a real opportunity today to achieve what the Freedom Flotilla aimed to do… and that is to break the siege on our brothers and sisters in Gaza,” AFP quoted him as saying on Friday.

Addressing cheering crowds waving Lebanese, Turkish, Palestinian, and Hezbollah flags, Sayyed Nasrallah paid tribute to the besieged people of Gaza and the Palestinian people in general. â€œI salute the activists who took part in the freedom making flotilla, their martyrs, and their wounded. I also salute the Lebanese activists who participated as messengers of the resistance and the Lebanese will.â€

Hezbollah Secretary General Sayyed Nasrallah on Friday stressed unity of Arabs and Muslims to stand by Egypt and Turkey to prevent Israel and the US from pressuring them.

His eminence called for more participation in the Freedom flotilla 2 which he said will be the door to end the siege of Gaza.

He was speaking during the Solidarity with the Freedom flotilla festival organized by Hezbollah in Beirutâ€™s southern suburb.

Nine coffins draped with Turkish flags were placed under the platform to show respect to the nine Turkish martyrs who were massacred by the Israeli navy commandos last Monday as they were sailing in international waters with aids to besieged Gaza.

TURKEY HAS ESTABLISHED ITS COURAGE AND PRESENCE

â€œThe martyrs were of one nationality. This was not a coincidence. It is Godâ€™s will. God chooses who He wants to be a martyr. I congratulate the Turkey and I express my deep sympathy to the families of the martyrs. I pay special respect to the Turkish people who united behind the Freedom flotilla, and the Turkish leadership that established its courage and its presence,â€ his eminence said.

The Hezbollah chief stressed â€œwe are in front of a grave incident in the course of our peopleâ€™s struggle with the occupation and usurping enemy, and we understand what has happened very clearly.â€

â€œA flotilla comprising several ships carrying individuals and supplies was bound to Gaza to break the siege. Hundreds of people from dozens of nationalities including some whose countries have diplomatic ties with Israel had taken part. A large number of them were Turks and Turkey has diplomatic and security ties with Israel. All of the participants were detained and taken to jail; however, they were released in a record time. Speaking of indications, this massacre was another proof to the aggressive nature of this enemy that was established on crimes, brutality, and massacres. It was another proof to the way Israel kills unarmed civilians, to the state terror, to the disrespect of any value, laws, and diplomatic ties. It is another proof that Israel believes it is above the law and above confessions to better serve its interestsâ€¦what happened in the Mediterranean is another proof that the current US administration was still committed to defending Israel and its crimes, by not condemning it and undermining calls for an international investigation. The US believes that Israelâ€™s crime was its natural right to defend itself. The question for Americaâ€™s allies who have been bargaining on it, isnâ€™t everything changing except the US relationship with Israel? What happened has exposed many governments in countries that claim to defend human rights; however they were mum because Israel was the perpetrator.â€

â€œThe Arab position was, and is still impotent. The activists were released in a record time, but thousands of Palestinians are still in Israeli jails. Whatâ€™s different today is that there were hundreds of Turks involved. Israel has miscalculated its moves because it perceived that its aggression will force the Turkish leadership to back down. I am pretty sure that Israel was shocked to hear the Turkish reaction on the popular and official levels. When Turkey told Israel that it will cut ties if the Zionist authorities kept any activist in custody or tried any of them, Israel was shocked because Turkey is a strong country with a strong leadership that knows how to use it power. For Turkey to cut ties with Israel would be tantamount to an earthquake in Israel. This is a weapon that Turkey has used; it did not demand the release of its nationals but all of the activists. This is a lesson for some of those who preach the policy of humiliation, delusion and wishful thinking that only result in disgrace. On the other hand a policy based on power can accomplish a lot.â€

â€œWhat the Freedom flotilla succeeded in accomplishing was that it brought back the Gaza siege to the forefront after the Arabs and the whole world forgot all about it. The blood that was shed and the throats that shouted impose upon every government in this world to have this cause on top of their agendas. Weâ€™ve heard (UN Secretary General) Ban Ki-moon, Russia, and other states demanding Israel stops its blockade on Gaza; something we did not hear before the flotilla massacre. The Egyptian government has opened the Rafah crossing and we thank Egypt for this gesture. There has been a Palestinian tendency towards reconciliation. I tell you that what has happened will further complicate the situation in Israel and it will render the Israeli incapable of thinking or planning another aggression on Gaza. Yet the aggression on Lebanon, Syria, or Iran comes in the framework of another set of calculations. This was a scandal for Israel, a scandal for the US policy, a proof of the Israeli failure and fiasco.â€

The S.G. described Israelâ€™s act as an act of stupidity at a time it is starting to count its losses. â€œThe Mossad chief says that Israel is starting to become a burden on the shoulders of the US, because with every Israeli failure, America is concerned with paying the price, and this is what General Petraeus said.

DID ANY ARAB PARLIAMENT FOLLOW KUWAITâ€™S SUIT AND WITHDREW FROM ARAB INITATIVE?

Sayyed Nasrallah praised Turkey stance during the war on Lebanon in 2006 and the war on Gaza in 2008- 2009. â€œThe Turkish position developed significantly when the attack on the flotilla took place. I will not say that Israel has lost Turkey, but I can say that Israel has begun to lose Turkey and this is a very significant change in the region. Will it entirely lose Turkey? This is interrelated to the developments.

Of the very important results of this crime is the Kuwaiti stance. The Kuwaiti parliament demanded that Kuwait withdraws from the Arab initiative and the government agreed. Did any other Arab parliament take a similar step? We salute Kuwait for taking this step that bears political and moral values, because the Arab initiative includes major concessions to the Israelis. What happened embarrasses all those who call for the normalization of ties with Israel and those who bargain on negotiations with the enemy. What Israeli did to the Freedom flotilla embarrasses the so called Arab moderation. I have read in some Gulf newspaper impudent articles that defended the deeds of the Israeli soldiers; such articles are rarely found in Israeli newspapers.â€

ISRAEL IS AFRAID OF THE RED AND YELLOW FLAGS

â€œThere is a good chance today to end the blockade imposed on Gaza and this requires more Freedom flotillas. This is when Israelâ€™s goal â€“ to think of taking similar steps â€“ falls down. I call on more Lebanese participation in the Freedom flotilla 2. Today the European Peace Initiative said it was organizing another flotilla. Where do the Arabs and the Muslims stand? Israel is afraid of the red flag (Turkey) as much as it is afraid of the yellow flag (Hezbollah). Those who take part in the Freedom flotilla 2 should know that they belong to a resistance that doesnâ€™t leave anyone in Israeli jails.â€

WE HAVE TO UNITE TO STAND BY EGYPT AND TURKEY

â€œWe call on the Egyptian leadership to keep the Rafah crossing open. Arab governments do not need to resort to the UN Security Council to release the detained. Let us unite as Arab countries and Muslim countries and stand by the Egyptian leadership, for should we do this, no one in this world will embarrass it and force it to close the border. Let us cooperate to keep this crossing open and this way, we can end the siege of Gaza. We should back the Turkish position knowing that the Turkish leadership will come under great pressure. Obama contacted the â€˜Tayyibâ€™ (good man) Recep Tayyib Erdogan and the pressure will continue on Turkey to prevent it from taking a leading role with the Arabs in their struggle with Israel and to stop the deterioration of its ties with Israel.â€

The Secretary General stressed the Gaza cause should remain the center of the international concern. â€œThe Palestinian cause should become an international cause. In the past, they said that this is the cause of the Arab world, not the Islamic world. In our Arab world, the cause was transformed into a Palestinian cause; the cause itself became the cause of Gaza, the West Bank, and the refugees. We have to underline that this cause is a humane, Islamic, Arab, and global cause. Â We have to insist on the international probe even though we already know that it will be undermined. Nevertheless let us demand an international probe and embarrass Israel because it will undoubtedly reject it. We have to sue the Israeli leaders anywhere possible in the world. Suing Israel for its crimes will render Israeli leaders beleaguered and perplexed. The whole world should learn the truth about Israel which projected itself as a democracy committed to international laws. We have to benefit from the Freedom flotilla to remind the world of Israelâ€™s massacres.â€

Sayyed Nasrallah stressed the importance of taking part in the Freedom flotilla 2 to set Palestine, Gaza, the West Bank, and Al-Quds free and protect them from the US-Israeli scheme. 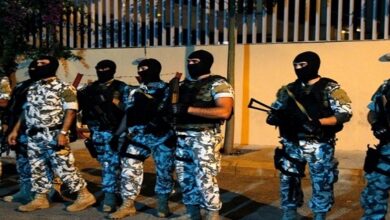