Netanyahu recently delivered an anti-Iran speech at Congress to persuade American lawmakers to put more pressure on Tehran during nuclear negotiations. In this regard, some Lebanese clerics in their Friday prayer weekly sermons separately decried Israeli Prime Minister Benjamin Netanyahu’s Congress address, according to TNA news .

Of those, Seyyed Ali Fazlollah placed stress on the crimes perpetrated by the regime of Zionism in occupied land of Palestine and questioned the so called stance taken by Israeli officials against terrorism.

“One of the biggest arsenals belonged to the regime of Zionism,” said the cleric stressing this very line that this regime also forwards its nuclear activities and has access to nuclear weapons.

Along with him, Sheikh Afif Nablesi censured the crimes of regime of Zionism in the region. Seasoned cleric counted terroristic threat of Israel very serious and dangerous for the nations of Lebanon, stressing the prime importance of Islamic resistance in countering any credible threat of Zionism.

In step with him, another prominent Lebanese cleric, Sheikh Abdol Amir Qablan called on Muslims to team up and unified against the plots hatched by the regime of Israel in the region, foiling the machinations it concocted with its puppets in Islamic countries.

In another line in this regard, Sheikh Ahmad Qeblan placed stressed on the plagued milieu Muslims in Middle East are mired in and expressed his concern over the catalogue of crimes perpetrated by extremist and Takfiri groups which all engineered and orchestrated by the regime of Zionism.

In a speech to the US Congress, Netanyahu depicted Iran as a “threat to the entire world” and called on Washington not to negotiate a “very bad deal” with Tehran over its nuclear program.

Iran and the P5+1 group – Russia, China, France, Britain, the US and Germany – are negotiating to narrow their differences over the Islamic Republic’s nuclear energy program ahead of a July 1 deadline.

Sayyed Nasrallah: Hezbollah Has Every Conceivable Type of Weapon 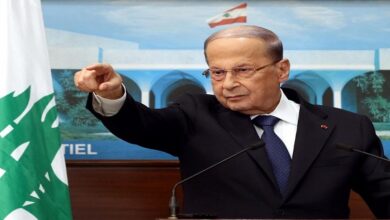