Iran’s Foreign Minister Mohammad Javad Zarif has ridiculed the administration of US President Donald Trump for attempting to take credit for “defeating” a notorious terror group of Washington’s own making in the Middle East.

“Trump & Co try to take credit for the ‘defeat of ISIS’—which was created & nourished by their invasion of Iraq & their fomenting of unrest in Syria,” Zarif said in a message posted on his Twitter account on Monday, using an acronym for the Takfiri Daesh terror group.

The White House and Trump on Friday announced that Syria was now free from Daesh.

White House Press secretary Sarah Huckabee Sanders told reporters that the terror group’s territorial rule had been “100 percent eliminated” from Syria, while showing a map to reporters that she said displayed the eradication of Daesh’s so-called caliphate over the last two years, in what was viewed as an attempt to give the US president credit for the “defeat” of Daesh.

Later in the day, Trump took to Twitter and said Daesh no longer held any territory in Syria.

Following Washington, the US-backed militants in Syria pronounced the death of Daesh’s “caliphate” after driving out the terrorists from a small village in Dayr al-Zawr Province.

Daesh was largely defeated in late 2017 by the Syrian army thanks to support from the Damascus government’s allies, namely Iran and Russia, losing almost all the swathes of land it had captured from the Syrian government in the course of its terror campaign.

In 2014, when Daesh showed face in Syria, the US and a coalition of its allies invaded the Arab country under the pretext of fighting the Takfiri outfit. That military campaign not only did little to eliminate the terror group, but, on numerous occasions, hampered national army advances on the battlefield against Daesh and led to civilian casualties.

Over the past few years, Russia and Syria have frequently reported that the US provides support to Daesh in areas where Washington has stationed military forces and runs military bases. There have also been numerous reports of the US military airlifting Daesh terrorists from different locations to protect them against advancing Syrian army forces.

This is not the first time that that Trump claims victory over Daesh.

Last December, the US president announced that he would withdraw all 2,000 American troops from Syria.

In a reversal, The Wall Street Journal, later reported that Washington was planning to keep about 1,000 troops in Syria.

However, US Joint Chiefs Chairman General Joseph Dunford rejected the report as “factually incorrect,” stressing that there was no change to the planned 400 troops, which the White House wanted to keep in Syria.

Moreover, US special representative for Syria, Jim Jeffrey, said on Monday that American forces would remain in Syria in limited numbers to continue the so-called fight against the Takfiri group and find the whereabouts of Daesh leader Ibrahim al-Samarrai, also known as Abu Bakr al-Baghdadi.

“This is not the end of the fight against Daesh. That will go on, but it will be a different kind of fight,” he said, according to the Middle East Monitor.

In February, an Iraqi lawmaker said that al-Baghdadi, was being protected by US forces in a western desert area located in the Iraqi Province of al-Anbar.

Hassan Salem from the Parliament’s Al-Sadiqoun Bloc, which is associated with the Asa’ib Ahl al-Haq (League of the Righteous) paramilitary group, said, “He is traveling between Iraq and Syria under US forces’ protection.”

“He’s also given credit for saving the Jews. So, while they’re at it, he might as well take the credit for Xe[r]xes’ defeat of Sparta,” Zarif said.

US Secretary of State Mike Pompeo said recently that it was possible God raised Trump to be president in order to protect Israel from Iran.

Pompeo made the remarks in a recent visit to the occupied Jerusalem al-Quds, where he paid a controversial visit to the Buraq Wall, called by Israel as the Wailing Wall, in the Old City.

Asked “could it be that President Trump right now has been sort of raised for such a time as this, just like Queen Esther, to help save the Jewish people from the Iranian menace?” he said, “As a Christian, I certainly believe that’s possible”.

Iran is home to some 25,000 Jews who are a recognized minority and are even represented in the parliament.

The Hebrew Bible has repeatedly praised Persian King Cyrus the Great as the patron and deliverer of the Jews who put an end to their Babylonian captivity.

Zarif had highlighted the historical fact in an earlier tweet, slamming the US for trying to distort Torah in line with its Iranophobia campaign. 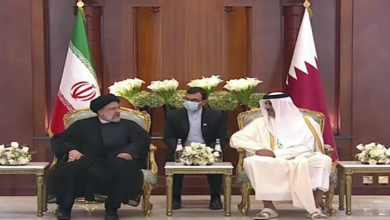