Addressing a large and fervent congregation of the people on Tehran University campus on Friday, Ayatollah Movahedi Kermani said, “These must be calculated and contemplated carefully. Are the words and phrases in this nuclear deal clear enough and well thought about?”

“The people, and particularly the revolutionary folks have concerns, which I do not know whether there is rational ground for such worries or not, but they do exist,” he said.

He pointed to the recent remarks of Supreme Leader of the Islamic Revolution Ayatollah Seyed Ali Khamenei who underlined the necessity for keeping vigilant against the enemies’ display of superficial and unreal moderation, stressing that their true hostile nature was shown in the recent talks between Tehran and the world powers.

Ayatollah Khamenei said the nuclear talks proved the US hostility towards Iran and Islam, and added, “The enemy’s smile shouldn’t be taken seriously.”

Addressing thousands of people from the Central province of Qom, Ayatollah Khamenei said victory will be surely achieved through resistance.

“The enemies thought in vain that they could compel Iran to hold talks under sanctions,” he said, and added that Iran has not come to the negotiating table due to the pressure of the sanctions as Iranians are a resistant nation.

The leader said the enemies think that they have come to know the Iranian nation, but they are wrong.

The leader said Iran is negotiating with the West only because it has discerned it to be necessary, and stressed that Tehran has accepted to negotiate with the US only on the nuclear issue and not on bilateral ties, reminding that Tehran and Washington are still enemies at the end of the day.

“… we have already expressed our readiness to negotiate with the Satan (the US) on specific issues if necessary.”

On November 24, Iran and the Group 5+1 (the US, Russia, China, Britain and France plus Germany) sealed the six-month Joint Plan of Action to lay the groundwork for the full resolution of the West’s decade-old dispute with Iran over its nuclear energy program.

In exchange for Tehran’s confidence-building bid to limit certain aspects of its nuclear activities, the Sextet of world powers agreed to lift some of the existing sanctions against Tehran and continue talks with the country to settle all problems between the two sides.

Then the seven countries’ experts started talks on how to implement the agreement. In December, Iran and the six world powers held four days of talks in Geneva. The first experts meeting was held in Vienna, Austria, on December 9.

The Vienna negotiations among experts were scheduled to continue until December 13, but the Iranian negotiators cut short the talks and returned to Iran in protest at the US breach of the Geneva agreement by blacklisting a dozen companies and individuals for evading Washington’s sanctions.

US Secretary of State John Kerry tried to soothe Tehran’s anger over Washington’s fresh sanctions in a phone call to Zarif in December.

Later during a phone conversation on December 22, Zarif and EU’s Ashton, who heads the world powers’ delegations in the talks with Tehran, decided to continue the negotiations between their experts after Christmas.

Iran and the six world powers ended a third round of expert-level talks in Geneva, Switzerland, last Tuesday in a bid to devise mechanisms to implement the interim nuclear deal struck in November.

The meeting between Araqchi and Schmidt will be held to finalize the expert and implementation stages of the Geneva agreement after the experts talks were held in Geneva between Tehran and the Group 5+1. 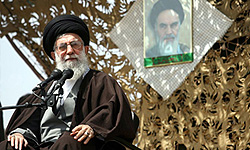 Slogan of “Down with America” not inconsistent with nuclear deal