Pakistan between State of Madinah and deviant Saudi Umayyad model.

It seems that Pakistan has stuck between the idea of State of Madinah and deviant Umayyad regime.

Pakistan between State of Madinah

The PPP which rules Sindh province claims it believes in fundamental human rights, democracy and freedom.

But their actions falsified their words. So far, remnants of Umayyad despotism, the nasbis remain powerful. They have control over state of affairs through religious establishment.

And both of them: the ruling elites and these nasbis and takfiris work in tandem on some issues.

One can see their unholy alliance nowadays. Since the Coronavirus first reported in the world, the regime reacted like Umayyad rulers.

They exempted the people coming from the entire world to Pakistan from Covid19 related measures such as quarantine.

With this exemption for rest of the world, they put Shia pilgrims (Zaireen) under quarantine at the government’s quarantine centres for more than a month. These financially poor Zaireen had returned the country from Iran via Taftan border crossing.

And now, the entire Pakistan remains open for Friday prayers, Taraweeh prayers, daily prayers and even for huge rush at markets/bazaars.

All those who had no objection to the aforesaid gatherings, had run malicious misleading campaign against Shia Muslims.

All non-Shias are holding their religious gatherings and even throng bazaars and markets for shopping without observing social distance but they gave an impression as though the government had not allowed them anything.

Factually speaking, non-Shias have been offering en masse congregational prayers of non-obligatory Taraveeh since the moonsighting night of Ramazan to date.

Even then, they misled people despite the fact that Shia Muslims have brought out a symbolic azadari procession due to SOPs regarding Coronavirus but non-Shias had made many violations of SOPs that spread Coronavirus in the country.

But these so-called Sunnis who call themselves Ahle Sunnat and object to observance of anniversary of martyrdom of Hazrat Ali (AS) whom they claim to revere!

As a matter of fact, they follow Saudi Wahhabism nowadays because Saudi monarchy has given the highest award to Indian Prime Minister Narendra Modi.

Ironically, these hypocrites didn’t even object to Holi which Pakistani Hindus celebrated in March 2020 violating the social distancing rules.

Shia Muslims lament this double standard and hypocrisy and discriminatory policy of the government.

But Islamabad remains stuck between Saudi Umayyad model and Jinnah’s Pakistan which Imran Khan has updated with the narrative of State o Madinah. 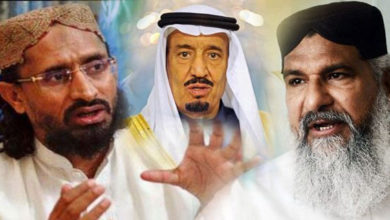 Fazl invites banned ASWJ ringleader and others to join MMA