At least six people have been killed and dozens more injured in shelling by troops loyal to Yemen’s Ali Abdullah Saleh in the city of Taizz, medics say.
â€œThe bombing killed six people this morning [Friday], all of them civilians, and wounded dozens of others that were taken to the hospital,â€ AFP quoted a medical source as saying.

One of those killed was reportedly a nine-year-old child.
The US-backed regime troops began cracking down on anti-government protesters shortly after 12:00 am local time.
According to witnesses, the shelling intensified and moved towards residential areas on Friday morning.
People in the impoverished Arab state have turned out regularly for protests in major cities since January, calling for an end to corruption and unemployment and demanding the ouster of Saleh.
Protesters also demand that Saleh should be tried for crimes he has committed against the people of Yemen during the revolution.
Hundreds of protesters have been killed and many more injured in brutal crackdown on the popular uprising by the US-backed government forces, according to local reports. 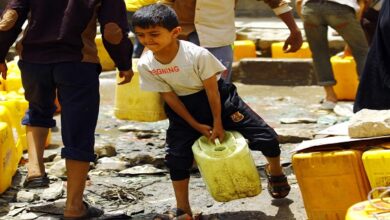