The government’s policy towards the Israeli incursion into Gaza was in danger of falling apart on Tuesday night in the wake of the surprise resignation of the Foreign Office minister Sayeeda Warsi and a demand by Nick Clegg that Britain immediately suspend arms export licenses to Israel.

Lady Warsi said the prime minister had lost moral authority, undermined the national interest and deprived Britain of its historic role as an honest broker in the Middle East by refusing to condemn the aggressive Israeli strikes against Gaza.
In her strongly worded resignation letter, whose morning publication came as a surprise to No 10, Warsi warned that “our approach and language during the current crisis in Gaza is morally indefensible [and] is not in Britain’s national interest”.
She also complained that Cameron’s response may become “a basis for radicalization [which] could have consequences for us for years to come”.
Her departure came after internal argument inside the National Security Council over Cameron’s refusal to condemn the aggressive Israeli response to the Hamas resistance.
British ministers have condemned the outcome of the Israeli bombings as intolerable and appalling, but Cameron has barred ministers from describing the Israeli bombings as disproportionate, and refused to attribute final blame prematurely even for some of the attacks on UN schools in Gaza.
Warsi’s departure exacerbated coalition tensions over Gaza, as Clegg urged an immediate suspension of arms export licenses, saying that Israel had breached the conditions. He said the suspension should remain in force until agreement has been reached across the government on any permanent revocation in the coming days.
Ministers agreed a review of the licenses last week, but Clegg has decided to ratchet up the pressure, saying: “I believe the actions of the Israeli military, overstepping the mark in Gaza, breach the conditions of those export licenses and that’s why we want to see them suspended pending a wider review of whether they should be revoked more permanently in the long run.”
Revealing he has been putting pressure on his Conservative colleagues for a suspension of the licenses rather than a review, he said: “I believe we will be able to make an announcement on this, finally, very shortly. It’s very important that in response to clearly what appears to be disproportionate military action of Israel in Gaza, we should be suspending the arms export licenses that presently exist.”
The departure of the first British Muslim cabinet minister is a major blow for Cameron, potentially weakening Conservative support among ethnic minorities in marginal seats.
Warsi’s resignation also broke a dam of criticism of Israel in the Conservative party. Boris Johnson, the London mayor often touted as a future leadership contender, condemned Israel with the words Cameron has declined to deploy. 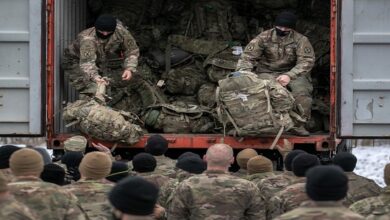 Biden admin ditches May obligation to withdraw troops from Afghanistan