In Saudi Arabia, protesters have taken to the streets in the countryâ€™s oil-rich Eastern Provinceâ€™s, calling on Riyadh to withdraw its security forces from Bahrain.

The demonstrators accused Saudi officials of committing crimes against pro-democracy protesters in Bahrain.

They slammed Saudi Arabia for supporting and helping Manama in its violent crackdown on the Bahrainis. They called for the release of political prisoners.

The demonstrators also called on international rights groups to speak out against the continuous torture and abuse of Saudi Arabian prisons.

On May 23, huge crowds of women protesters gathered in Qatif, chanting anti-regime slogans and expressing solidarity with the Bahrainis.

Back in April, Riyadh sent more tanks and weapons for its forces in Bahrain during the Formula One Grand Prix auto race in Manama.

The Bahraini revolution began two years ago, when the people, inspired by the popular revolutions that toppled the dictators of Tunisia and Egypt, started holding massive demonstrations.

On March 14, 2011, troops from Saudi Arabia and the United Arab Emirates invaded the country, upon Manama’s request, to help the Bahraini regime quash the uprising.

Saudi Arabia and Bahrain both have been witnessing anti-regime protests since 2011. 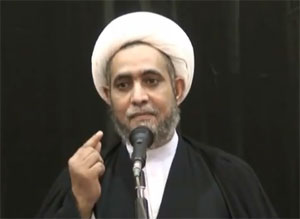 Al-Habib criticizes preventing the Saudi Shia from establishing their prayers