Protesters have taken to the streets in Saudi Arabia’s restive Eastern Province, calling for the release of senior Shia cleric Sheikh Nimr al-Nimr.

Blocking rural roads in the Qatif region, the demonstrators denounced the Saudi regime’s suppression of the Shia population in the country.

Sheikh Nimr was attacked and arrested in Qatif in July 2012. He has been charged with disturbing the country’s security, giving anti-regime speeches, insulting King Abdullah in Friday Prayers sermons, and defending the political prisoners.

A Saudi court has recently sentenced Sheikh Nimr to death. However, the final ruling has been postponed.

There have been numerous demonstrations in Saudi Arabia’s oil-rich Eastern Province since 2011, with the protestors calling for political reform and an end to widespread discrimination.

Another anti-regime protest was staged in the Qatif region on Friday despite the ongoing crackdown on rallies.

International human rights organizations have criticized Saudi Arabia for failing to address the rights situation in the kingdom. They say Saudi Arabia has persistently implemented repressive policies that stifle freedom of expression, association and assembly.

A court in the Saudi kingdom has also given leading Shia cleric Sheikh Tawfiq al-Amr an eight-year jail term and a ten-year travel ban. He has also been barred from delivering religious sermons.

The cleric has been charged with criticizing the country’s ruling system and calling for political reform. He has been arrested several times over his calls on the Saudi government to give Shias further freedom to exercise their religious rights. 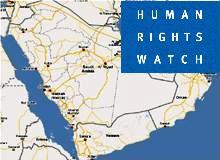