An Israeli NGO says more than 200 illegal settlements have been constructed across the occupied West Bank since 1967.

According to Palestinian media reports, B’Tselem said in a statement that the settlements currently house over 300,000 Israelis.
The reports added that tens of thousands of hectares of land have been so far seized from the Palestinians for the Israeli settlements.
The Israeli regime has confiscated additional lands to build bypasses for the settlers while highly militarized checkpoints have been constructed to channel Palestinians’ movement away from the settlements. Palestinian farmlands have become off-limits to their owners, reports noted.
Meanwhile, the group added that the Israeli separation barrier was established within the West Bank in an attempt to keep as many settlements as possible on the “Israeli side.”
Israeli media outlets on June 5 cited an announcement by the regime’s Housing Ministry regarding the release of new tenders for 1,500 new settlement units in a number of settlements on Palestinian lands.
Palestinians are seeking to create an independent state on the territories of the West Bank, East al-Quds (Jerusalem), and the besieged Gaza Strip and are demanding that Israel withdraw from the occupied Palestinian territories.
The presence and continued expansion of Israeli settlements in occupied Palestine has created a major obstacle for the efforts to establish peace in the Middle East.
The illegal settlements have been built since Israel’s occupation of the Palestinian territories of the West Bank and East al-Quds in 1967.

Hamas: We do not have any military formations in Syria 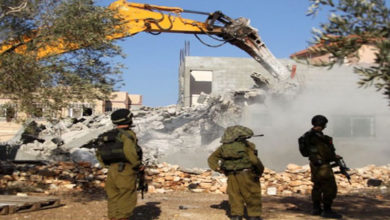