Four regional Arab states have reportedly given the green light to a contentious US “peace” plan on the Palestine issue, which is said to have been devised based on Israeli interests at the cost of Palestinian rights.

Saudi Arabia, the United Arab Emirates, Egypt and Jordan assured the US of their support for the plan during visits to those countries by US President Donald Trump’s senior adviser and son-in-law Jared Kushner, and Jason Greenblatt, the US envoy to the region, Israel Hayom daily reported on Monday.

The US is pushing to conclude the proposal despite the Palestinian Authority (PA)’s rejection of its mediation role in the conflict with Israel.

Palestinians froze ties with the US last December when Trump recognized the occupied city of Jerusalem al-Quds as Israel’s “capital,” with the PA saying it can no longer trust Washington.

Trump, however, has hailed the plan as the “deal of the century.”

Speaking to Palestinian newspaper Al-Quds on Sunday, Kushner sharply criticized PA chief Mahmoud Abbas’ “ability to make a deal” and said that the plan would be presented with or without his consent.

According to an unnamed Egyptian official cited by the Israeli daily, the Arab leaders would also not oppose any attempt by Washington to override Abbas’ interests.

“Arab states will not be the ones to throw a wrench ‎in the wheels of the peace process, and that Abbas’ ‎continued refusal to work with the Americans will ‎lead to a regional peace plan being launched without ‎him,” a Jordanian official also said. ‎

Osama Hamdan, a senior member of the Gaza-based Palestinian Hamas resistance movement, told Al Jazeera that the Arabs were being used by the US to exert pressure on the PA.

Israel rallying US support over Golan

Separately, Yair Lapid, the head of the Israeli party Yesh Atid, who was visiting Washington on Monday, asked US lawmakers to recognize “Israel’s sovereignty over the Golan Heights.”

“It’s time for the world to recognize Israel’s sovereignty over the Golan Heights,” he told reporters, shortly after he addressed the influential Brookings Institution on the same subject.

Tel Aviv has been occupying Golan since 1967, when it seized the Syrian territory during a Western-backed war. 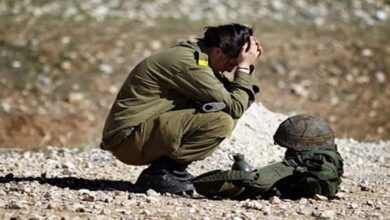