Shia leaders and Shia Hazara notables have urged the Chief Minister Balochistan Dr Abdul Malik Baloch to launch an operation to eliminate the Yazidi takfiri nasbi terrorists in the province and ensure a safe passage for pilgrims to Iran.

They also demanded immediate payment of compensatory amounts to the heirs of the Shia martyrs. The head of the delegation, Abdul Qayyum Changezi, informed the chief minister about the problems of the Shia Hazara community. Allama Maqsood Ali Domki of the Majlis-e-Wahdat-e-Muslimeen demanded operation to crush Lashkar-e-Jhangvi and other takfiri terrorist outfits.

He ensured the delegation that the government was taking concrete steps for protection of the Shia Hazara community and added that the federal government had also planned to initiate flights from Quetta to Zahidan on concessionary rates and stressed that the pilgrims should benefit from it. He also ensured the delegation that no hurdles would be tolerated in the disbursement of the aid amount among the dependants of those who lost their lives in different incidents.

Shia leaders and notables insisted that security should be beefed up on the road route because majority travels via road for pilgrimage.

Army has nothing to do with banners of COAS Gen Raheel: ISPR 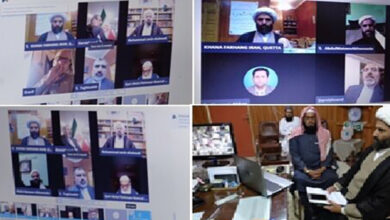