Without disclosing sectarian identity of the Deobandi takfiris, Inter-Services Public Relations (ISPR) said “Security forces conducted a special IBO near Punjab Housing Society, Lahore. A terrorist was killed during the operation while four soldiers and two officers received injuries.”
The military’s media wing said in a statement that the security forces seized suicide jackets and explosives from the possession of the terrorists. A female suspect was also taken into custody.
In less than two months after the deadly Mall Road attack, terror revisited Punjab’s provincial capital earlier this month when a suicide bomber targeted a census team in Lahore’s outskirts, killing at least seven people – including four soldiers of the Pakistan Army – and injuring 15 others.
Outlawed Tehreek-e-Taliban Pakistan (TTP), Deobandis party later claimed responsibility for the attack. According to Punjab govt spokesperson Malik Ahmed Khan, the attack took place early in the morning at Manawala Stop on Bedian Road, when army troops were boarding a van, engaged in census duty. 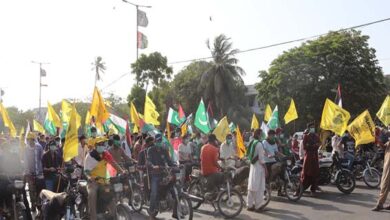