More than 5,000 Shias marched in the streets of New York on Friday to voice their anger at the Pakistani government and the Taliban for what they called a â€œgenocideâ€ in their community.
The demonstrators carried pictures of their deceased loved ones – some of whom were doctors and clergymen – and placards bearing slogans reading, â€œStop the violence against Shia Muslims in Pakistanâ€, â€œWe are people of peaceâ€ and â€œPakistani Shia have the right to live.â€
The Ten Thousand Souls March on Friday had been endorsed by over a hundred academics, scholars and Muslim organizations. Protesters said they must get the word out about the â€œgenocideâ€ in Pakistan.
â€œTens (of) thousands Shia Muslims have been massacred. They have been targeted. They have been involved in attacks by the Taliban and other Takfiri-Wahabi terrorists of outlawed Sipah-e-Sabaha and Lashkar-e-Jhangvi. They have been targeted in their offices, in their clinics, in their hospitals, at their homes,â€ said Wajih Rizvi, a protest organizer. ‘This has to stop. It cannot continue. It is inhumane.â€
â€œThis demonstration is to condemn the violence of the Taliban, al Qaeda and all these extremists in Islam,â€ said one 21-year-old US protester of Pakistani descent, who would only give his name as Komal. â€œThey are not considered Muslims, because they are doing what the Quran is against,â€ she said.
The march â€“ in which many women and children participated â€“ started outside the UN headquarters and wrapped up at the Pakistani consulate.
Protest organizers also stated that they are looking for signatures on petitions, which will be handed over to Permanent Pakistani Representative to the UN Masood Khan to demand direct action from Islamabad.
â€œHopefully, the Pakistani government will hear us. We have not got the response that we should have. That is why all of us have gatheredâ€¦ to protest,â€ a female protester said.
â€œWe are hoping to get as many signatures as we can. We want the awareness to be out. We want people to know what we are out for,â€ said another demonstrator.
â€œIf we can encourage people who are interested in peace to stand up, and actively give their voice to a peaceful, civil and respectful society, then hopefully the table can turn, and those who are interested in sectarian tensions and violence will not be able to achieve their objectives,â€ said a clergyman attending the demonstration.
A press release issued by the Consulate of Pakistan expressed solidarity with the Shia community and said that protecting and promoting the fundamental rights of all citizens of Pakistan regardless of their religion or ethnicity was a sacred mission of the democratically elected Government of Pakistan.
The embassy also assured the protesters that the petition of the â€œ10,000 Souls Marchâ€ would be transmitted to the concerned authorities in the country.
The pro-Taliban militants have been involved in a violent campaign against Shia Muslims in Pakistan over the past years.
Shias living in Kurram tribal region have been facing a humanitarian crisis since November 2007, when the pro-Taliban groups cut off the area from the rest of the country.  Local sources say hundreds of Shia Muslims have been killed in the region since the start of the campaign.
Several Shia religious gatherings have also been targeted in different parts of the country over the past few months.  According to Human Rights Watch, the Pakistani government has failed to stop violence against Shias, who account for around 25 percent of the 167-million-strong population of the country.
Last month, a bomb attack claimed by the Tehreek-i-Taliban Pakistan (TTP) on a Shia procession killed eight and wounded 30 others as the community marked their holiest day of Ashura. The blast followed another suicide attack â€“ also claimed by the TTP â€“ that killed 23 people at a Shia procession in Rawalpindi, the countryâ€™s deadliest bombing for five months.

Pakistan and Iran to restart a fortnightly passenger train before Muharram 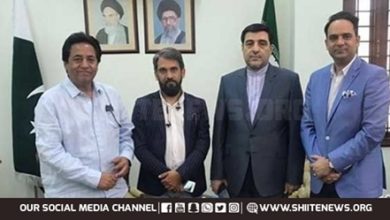