Amazon has removed a book written by Hezbollah Deputy Secretary General Sheikh Naim Qassem from its bookstore under Israeli pressure after UN Special Coordinator for Lebanon Jan Kubis recommended it as “a necessary reading.”

The American company removed the book from its sales sites in the US and all over the world after Haim Iserovich, a reporter from the Hebrew-language Maariv daily, asked for its withdrawal.

Kubis wrote on Twitter on May 20 that he was “grateful for an open and substantive discussion on a broad range of topics with Deputy Secretary General Naim Qassem of Hezbollah. On top I received a copy of his book — a necessary reading.”

The UN official did not specify which of the Hezbollah official’s 11 books he had received, but Iserovich found that at least one of these books – “Hizbullah (Hezbollah): The Story from Within” – was being sold by Amazon.

The Maariv reporter noted that the book says Zionism violates the most basic human rights and that “Zionists took over Palestinian land, carrying out aggression against a peaceful Palestinian people.”

The reporter said that the promotion of the book on Amazon.com violates the US sanctions imposed on Qassem, which ban US citizens and businesses from having any financial contact with him.

The US has long labeled Hezbollah as a “terrorist organization”.

In May 2018, the US and Persian Gulf allies imposed additional sanctions on the Hezbollah leadership, targeting the group’s Secretary General Sayyed Hassan Nasrallah and his deputy as well as three other officials with the movement.

Hezbollah was established following the 1982 Israeli invasion and occupation of southern Lebanon.

The movement waged a resistance campaign against Israeli forces and pushed them out of southern Lebanon in May 2000.

Since then, the group has grown into a powerful military force. Israel also suffered a humiliating defeat from Hezbollah during a 33-day war in July 2006.

Sayyed Nasrallah: Berri is the Major Guarantee in Difficult Times, We Trust Aoun 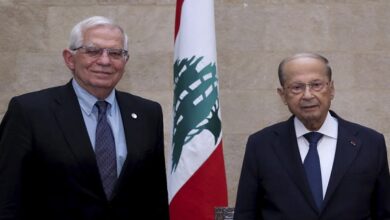