The United States, in a joint action with its Persian Gulf Arab allies, has imposed a new round of “terrorism-related” sanctions on the leadership of Lebanon’s Hezbollah resistance movement, citing the group’s involvement with Iran.

The US Treasury Department said in a statement on Wednesday that the sanctions targeted Hezbollah Secretary General Sayyed Hassan Nasrallah and his deputy, Sheikh Naim Qassem, as well as three other officials with the movement.

The sanctions were imposed jointly by Washington and members of the so-called Terrorist Financing and Targeting Center (TFTC), including Saudi Arabia, Bahrain, Kuwait, Oman, Qatar and the United Arab Emirates (UAE).

A number of other individuals and firms, which are said to be affiliated with Hezbollah, were also hit with bans.

The bans were mainly targeted at Shura Council, the primary decision-making body of the resistance movement. It is comprised of 12 members who are tasked with making the group’s tactical decisions and oversee its activities countrywide.

Washington’s claims against Hezbollah come while the movement has been playing a significant role in the Syrian army’s fight against Takfiri terror groups, including Daesh and al-Nusra Front, thus preventing the spillover of the militancy gripping neighboring Syria into Lebanon.

Hezbollah was formed following the Israeli regime’s invasion of Lebanon and the ensuing occupation of its southern parts in 1980s, and currently constitutes Lebanon’s de facto military power.

Since then, the movement has helped the national army retake the occupied regions from Tel Aviv and thwart two Israeli acts of aggression in 2000 and 2006.

Hezbollah has seen its popularity sharply rise in recent years due to its successful counter-terrorism role, something that helped its political bloc make significant gains in Lebanon’s parliamentary elections this month much to the dismay of the US, Israel and Saudi Arabia, which are angry at the group’s victories against the terrorists they support in Syria.

The statement published on the Treasury’s website claimed Hezbollah is prolonging the situation in Iraq, Syria and Yemen “under the dictates” of Iran’s Revolution Guard Corps (IRGC), “putting the Lebanese state and the Lebanese people at risk, and destabilizing the entire region.”

The latest US sanctions came one day after the Treasury Department slapped sanctions on governor of Iran’s Central Bank Valiollah Seif, alleging it had funneled funds to Hezbollah.

It was the third round of sanctions announced by Washington since the US pulled out of the 2015 Iran nuclear deal in defiance of international warnings for the White House not to harm the landmark agreement.

US President Donald Trump announced on May 8 that Washington was walking away from the nuclear deal and said he would reinstate nuclear sanctions on Iran and impose “the highest level” of economic bans on the Islamic Republic.

During that speech, Trump accused the Islamic Republic of Iran of supporting terrorism and called its role in region “sinister.”

Besides Hezbollah and Russia, Iran has also been providing military advisory support to the Syrian army in its battles against foreign-backed terror groups.

After the announcement of Trump’s position on the Iran deal, the US Treasury said in a statement on its website Thursday that it imposed fresh sanctions on six people allegedly tied to the IRGC’s Quds Forces and three Iranian entities. 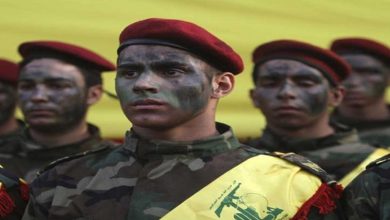 Hezbollah Will Inflict Unprecedented Losses on ‘Israel’ during Any Upcoming War: Haaretz