Leader of the Sadrist movement Muqtada al-Sadr warned against the consequences of bribery in Iraq, saying that it “destroys the state, the law, the government institutions, the civil society organizations, and is a Ba’athist method that many of the Iraqi people got used to.”

Saairun Alliance said the reform initiative launched by Sadr earlier will put an end to the corrupt officials who squandered the public money and looted the country’s resources.

Sadr has urges members of his bloc, including ministers and other officials to follow the procedures of the Anti-Corruption Supreme Council, warning that those who fail to do so will be held accountable.

Sadr also called on Prime Minister Adil Abd al-Mahdi to follow up on this issue, as he is also the head of the Anti-Corruption Council, urging him to stick to objectivity, transparency and full accuracy in dealing with this matter.

ISIS Wali of Awja killed in clash south of Tikrit 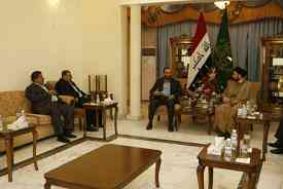