Iraqi Prime Minister Adel Abdul Mahdi says Baghdad government will send a delegation to the United States to explore avenues for an exemption from sanctions against Iran, which would allow the Arab country to keep importing Iranian gas used to feed its power stations.

“The American side is cooperating with Iraq to find solutions that would remove pressure on Iraq because the (Iranian) gas is linked to a very sensitive issue, which is electricity,” Abdul Mahdi told a news conference on Tuesday.
Abdul Mahdi’d remarks came on the same day that US Energy Secretary Rick Perry met Iraqi Oil Minister Thamir Ghadhban and Electricity Minister Qasim Mohammad Abid Hammadi al-Fahadawi in Baghdad.
“Sanctions were mentioned, they’re a reality, they’re there,” Perry told reporters.
Hayan Abdul Ghani, head of state-run South Gas Co. (SGC), told reporters on December 6 that Iraq needs at least two years to boost the country’s gas production to stop importing Iranian gas.
“Iraq’s current production of gas is not enough to meet our power stations’ demand and therefore we are still importing gas from Iran. We need at least 24 months to operate new gas projects and start production,” he said.
The United States said last month that Iraq can continue to import natural gas and energy supplies from Iran for a period of 45 days as long as it does not pay Iran in US dollars. Sanctions on Iran’s oil sector took effect on November 5.
According to the terms of an agreement struck between Tehran and Baghdad, Iran is to supply 35 million cubic meters of natural gas on a daily basis to the Iraqi capital city of Baghdad [gradually in three phases], while up to 25 million cubic meters of gas per day is supposed to be exported to the southern city of Basra. However, there are reports that Iran is currently exporting only 25 million cubic meters of gas per day to Bagdad and only 5 million cubic meters to Basra.
Trade between Iran and Iraq stands at $12 billion, but Baghdad is reportedly under pressure from the United States to stop business dealings with Tehran.
Iran is currently Iraq’s top trade partner, having sharply increased their trade exchanges in recent months despite US sanctions on the Islamic Republic.
Iranian Ambassador to Baghdad Iraj Masjedi said late last month that the two neighbors plan to raise their trade to $20 billion a year.
“The Iraqis need Iran’s natural gas, electricity, food items and industrial materials. If these exports are stopped, there will be problems not only for Iran but also for the Iraqis,” he added.

Ayatollah Sistani calls for protection of civilians in Fallujah 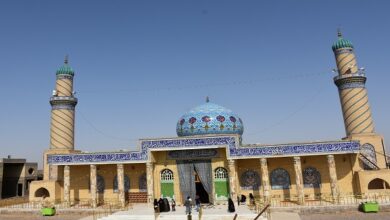