Khalid Al- Mulla, a head of Iraqâ€™s Scholars Group said that security authorities even failed to detect some attacks but they managed to avoid many.

â€œI am surprised by the statements released by some politicians blaming the government,â€, he said. â€œit managed to prevent many bombings but it did not declare that for security reasonsâ€.

Yesterday, 26 laden with explosives vehicles went off, 16 roadside bombs blown up beside other four attacks were conducted by gunmen resulted in the killing of scores and wounding of about 300 ones, according to a tally compiled by â€œShafaq Newsâ€.

Mondayâ€™s attacks are the fiercest since the withdrawal of the American troops at the end of 2011; analysts said that it is the deadliest day in term of number of people victimized in a single day.

Many people fear the return of violence back to the days of sectarian strife once peaked in 2006-2007 and claimed the lives of hundreds of thousands of Iraqis.

â€œWe have passed the condemnation and disapproval stage through dishonorable condemnations and we reached the confrontation stage at all the military, economic and intellectual levels, so clerics must help the security forces to reach the realistic stage to face the challenges,â€ he went on.

Mulla did not rule out the probability of having official identity cards be used to facilitate the passage of the laden with explosives vehicles to the heavily fortified International Airport of Baghdad.

â€œWe feel that the explosions are an echo of those hateful sectarian speeches released by some officials, which is also a result of the evil alliance between al-Nusrah front and the non-Islamic state of Iraq,â€ Mulla explained.

Several days ago, two Qaeda branches, one in Iraq and the other in Syria announced their unity

The attacks come five days ahead the countryâ€™s provincial elections, the first such one since the withdrawal of the American troops December 2011.

‘Imminent war’: US lists 80 Iraqi sites as targets to attack 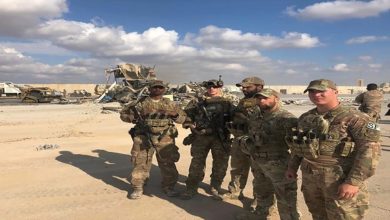 US deploys new troops to Iraq’s Ain al-Asad base: Report