Supreme leader Imam Khamenei’s representative in Bushehr said: “Iran, Iraq and Oman as three civilized countries in Persian Gulf region will determine the future of the world along with other literal states. Bushehr, Muscat and Basra have always had relations, interaction and mutual understanding.”

Ayatollah “Gholam Ali Safa’ee Bushehri” Sunday March10, 2013- on the first day of international conference “Bushehr, Basra and Muscat; Socio-Historical Relations” said: “Today the world requires unity against the united front of arrogance which is about to restrict sciences especially fundamental sciences like nuclear technology and nanotechnology in the world through scientific apartheid and monopoly.”
He added: “Islamic countries are definitely threatened by different means including science while history proves that western science and technology is indebted to Islamic sciences. Therefore this convergence and unity with a strategic and fundamental approach is a powerful strategic policy to liberate humans, science and the world dominated by global arrogance.”
Mentioning the important role of Iraq, Oman and Iran, Safa’ee Bushehri added: ” History of these three countries and their impact on global equations has been considered by academies and thinking room since a long time ago. These three civilized countries along with other literal states will determine the management of the world in middle-east.”
Supreme leader’s representative in Bushehr stipulated that: “Having hydrocarbon reserves and human resources as well as an ancient civilization, Persian Gulf waterway can facilitate humans’ freedom and development through convergence and unity. Persian Gulf is a waterway guiding humans to Islam and God. In fact, Persian Gulf is a gulf painted in God’s color.”
Stating that Basra has been renowned as Islam’s treasury from past, Ayatollah Safa’ee Bushehri added:” It is a cultural, scientific and political city. It houses one of the greatest scientific schools of thought in Arabic literature and its scholars have had special characteristics.”
Mentioning unique characteristics of Basra school of thought, he considered this as a very influential factor in the development of Arabic literature and added:”Basra school was powerful and precise and still has the same position.”
Supreme leader’s representative in Bushehr also considered Muscat as the peak of science and literature and added:”Muscat has always offered a beautiful atmosphere of Islam combined with unity and convergence. It is in fact represents Islam in different levels in the world. Scholars in the field of literature, peom and hadith [tradition] have emerged from Oman. It is one of the most important centers of Islamic world offering sciences.”
He also considered Bushehr as a city with an ancient history and added:”Historical age of Bushehr dates back to Elimites dynasty. It was in fact the center of civilization in southern Iran. It has a special position in producing science, literature and even Arabic terms and many Islamic sciences.”
He added:”It has historical background of constant fights against colonialism. It has stopped British colonialism four times and has turned the Persian Gulf to a cemetery of alien invaders.”
Finally he emphasized that:”Bushehr, Muscat and Basra have always had an intimate relation based on interaction, mutual understanding, development and convergence.”
First day of international conference called “Bushehr, Basra and Muscat; Socio-Historical Relations” was held in Persian Gulf University of Bushehr with the attendance of Iranian and foreign scholars and thinkers.
In this two day conference starting on Sunday morning March 10, 2013, ayatollah “Safa’ee Bushehri”, supreme leader’s representative and Friday prayers Imam of Bushehr, “Hadi Soleimanpour” head of Foreign Ministry’s Center for Internationl research and education, “Isaq Salahi” head of National Library and archives of Islamic republic of Iran, “Seyed Muhammad Mojabi” deputy of science and technology at Tehran Municipality’s Center for Studies and Planning and “Dr Ahmed bin Salim Ba’omar” head of Oman’s Center of Diplomatic studies attended this conference and delivered speeches.
This international conference was held with the cooperation of Persian Gulf University, representative of Foreign Ministry in Bushehr, Union of Islamic Universities in South Western Asia, Governance of Bushehr Province, Islamic Republic of Iran’s Broadcasting, Tehran Municipality’s Center for studies and planning, Bushehr Municipality, Pars Special Economic Energy Zone. It is the second round of a conference already held in Basra University.
Sultan Qaboos University and Basra University also cooperated to hold this conference. 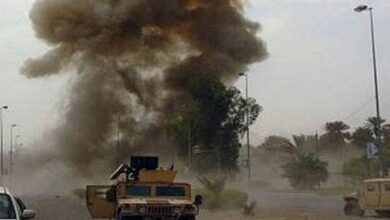 A bomb explodes in way of US convoy in Iraq