Bomb blasts across the Iraqi capital Baghdad martyrs at least 60 people majority belongs from Shia Muslims in one of the deadliest string of attacks which took its toll on Shia mosques among other places. According to the Shiite News, The explosions, which ripped through Baghdad on Friday, also injured more than 180 people according to Iraq’s Interior Ministry. A series of Five car bombs, three during prayers at Shiite Muslims mosques in Baghdad, and other attacks across Iraq martyred about 60 people, days after the government said Al-Qaeda was on the run. Â  The strikes conjured memories of the bloodshed that once engulfed the capital daily. The deadliest attacks struck near three mosques in Sadr City, the Shia Muslim neighborhood in Baghdad, just as worshippers departed Friday afternoon prayers. Â  Two car bombs in the impoverished district of Sadr City, one close to a political office of top Shia Cleric Syed Moqtada al-Sadr and another at a market in the area martyred 39 people and wounded 45, a security official said. Â  A third car bomb that exploded outside a Muslim Shiite mosque in Al-Ameen district in the east of the capital martyred eight people and wounded 13, he said. Â  Earlier, at Abdel Hadi al-Chalabi mosque, named after the father of former deputy prime minister Ahmed Chalabi, a car bomb killed five people and wounded 14, he added. Â  At least eight people martyred and 13 were wounded when a car bomb and a roadside bomb detonated outside Muhsin al-Hakim mosque in southeastern Baghdad. Â  A roadside bomb outside the Sadreen mosque in the Zafaraniya neighborhood in southeastern Baghdad martyred two people and wounded seven. One person was martyred and six were wounded when a roadside bomb exploded in an outdoor market in the southern Baghdad district of Dora. Â  West of Baghdad, in the Anbar province town of Khaldiya, six people were martyred and 10 were wounded when six roadside bombs exploded in a residential area where a police officer and a judge lived. Authorities imposed a curfew. Â  Friday’s violence came four days after Prime Minister Nuri al-Maliki said Al-Qaeda in Iraq was “bleeding” and its leaders “falling” after an Iraqi-US military operation on Sunday purportedly killed its top two leaders. Â  No one immediately claimed responsibility for the deadly attacks in Baghdad but the sequence of car bombings bore the hallmark of Al-Qaeda. “Targeting prayers in areas with a certain majority,” Baghdad security spokesman Maj. Gen. Qassim al-Moussawi said, referring to Iraq’s Shiite Muslim majority, “is a revenge for the losses suffered by al-Qaida. “We expect such terrorist acts to continue.”
Tags
Injures 112 in Iraq Wave of Bombings martyrs over 60 Shia Muslims
Facebook Twitter LinkedIn WhatsApp Telegram Viber Share via Email Print 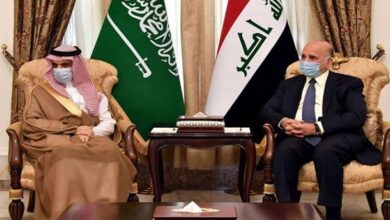 Over 100 pilgrims, on way to observe martyrdom anniversary of Imam Taqi (AS), martyred 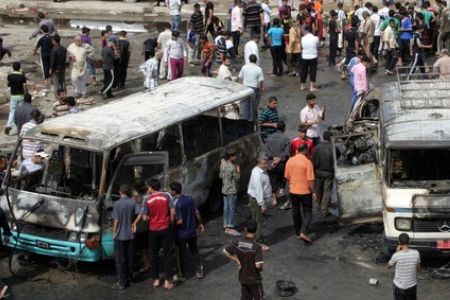