At least four Iraqi soldiers have been killed in a bomb attack on a military training center in the eastern Diyala Province.

Two Iraqi officers, who asked not to be named, said six assailants struck the base north of Baghdad, on Monday morning.

Five of them detonated their explosive vests once inside the training center.

The attack also left four others, including two officers, injured. The situation is now under control.

The Takfiri Daesh terrorist group has claimed responsibility for the attack.

There has been a hike in terror attacks as Daesh terrorists are under intense pressure in the city of Mosul, their last stronghold in the country.

Iraqi army soldiers and volunteer fighters from the Popular Mobilization Units have made sweeping gains against the Takfiri elements since launching the Mosul operation.

The Iraqi Ministry of Migration and Displacement says hundreds of thousands of people have been displaced amid the military operation to drive Daesh terrorists out of western Mosul.

The ministry said in a statement on Friday that 526,233 civilians had experienced forced displacement in the face of the offensive, noting that the refugees had been accommodated in camps set up in the southern, eastern and liberated western parts of Mosul. 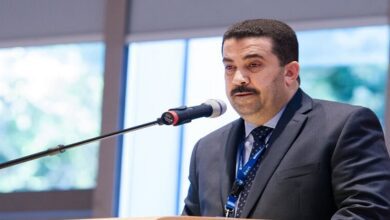 Iraqi PM due in Iran to discuss bilateral, regional cooperation