The US military has reportedly sent a new convoy of trucks carrying military and logistical equipment from Syria’s northeastern province of Hasakah to one of its bases in the semi-autonomous Kurdistan region of northern Iraq.

An Iraqi security source, speaking on condition of anonymity, told Iraq’s Arabic-language al-Maalomah news agency that a convoy of more than 20 Hummer military and armored vehicles as well as trucks loaded with foodstuffs and logistics entered Iraq on Tuesday.

The source added that the convoy came from an area in northeastern Syria, which is controlled by allied militants from the so-called Syrian Democratic Forces (SDF).

The source said that the vehicles headed towards al-Harir Air Base in the Shaqlawa district of Kurdistan region after rumbling through Semalka border crossing.

Unmanned aerial vehicles reportedly flew overhead and protected the military convoy as it came into Iraq.

Anti-US sentiments have intensified in Iraq since the assassination of top Iranian anti-terror commander Lieutenant General Qassem Soleimani in 2020.

General Soleimani, the commander of the Quds Force of Iran’s Islamic Revolution Guards Corps (IRGC), and his Iraqi trenchmate Abu Mahdi al-Muhandis, the deputy head of the Popular Mobilization Units, were targeted along with their companions on January 3, 2020 in a terror drone strike authorized by then-US president Donald Trump near Baghdad International Airport.

Two days after the attack, Iraqi lawmakers approved a bill that required the government to end the presence of all foreign military forces led by the US in the country.

On January 8, 2020, the IRGC targeted the US-run Ain al-Asad in Iraq’s western province of Anbar after launching a wave of attacks to retaliate the assassination of General Soleimani.

According to the Pentagon, more than 100 American forces suffered “traumatic brain injuries” during the counterstrike on the base. The IRGC, however, says Washington uses the term to mask the number of the Americans who were killed during the retaliation.

Iran has described the missile attack on Ain al-Assad as a “first slap.”

US presence in Iraq amounts to occupation: Sadr’s adviser 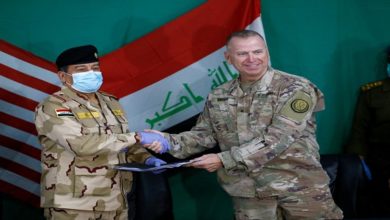