According to Iraqi media, the Iraqi Federal Police Command said in a statement on Sunday that security forces seized a drone and two rockets during a search and inspection operation on the border with Syria.

Another Iraqi security source also announced that three hideouts of the remnants of the ISIL terrorist group in the desert of Anbar province in the west of the country were destroyed and some weapons were discovered.

Security forces discovered and destroyed the three hideouts in the desert between Haditha and Rawa, the source added.

The Iraqi Security Information Headquarters also announced in a statement that the security forces discovered 12 rockets and grenades during a search of a village in Nineveh Governorate and detonated them under control.

A car leftover from ISIL elements was also discovered and destroyed in Anbar province.

ISIL forces have intensified their attacks on Iraqi civilians and security forces in the past three months. 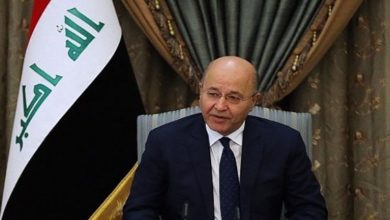 Iraq will not allow US military bases to use against Iran: President Salih

The Liberation of Jurf Al Sakhr is the Start of Great Victories to be Achieved Very Soon: Sayyid Ammar