Iraqi security officials say the ISIL Takfiri militants have mounted a major offensive on the central city of Ramadi as the terrorists are seeking to gain ground in Iraq’s troubled western province of Anbar.

The officer also stated that the ISIL members have detonated car bombs targeting Iraqi security forces in the city, located about 110 kilometers (68 miles) west of the capital, Baghdad.

The center of Ramadi has remained under the Iraqi government’s control, but neighborhoods around the city have been captured by the militants.

“The mortar fire has been continuous since midnight,” police captain Qusay al-Dulaimi said.

Anbar Province, which borders war-ravaged Syria, has been a major stronghold of the ISIL Takfiri militants and continues to be largely controlled by the terror group.

The ISIL launched an offensive in June and took control of Iraq’s second largest city, Mosul, before sweeping through much of the country’s Sunni Arab heartland.

The extremist group has threatened all communities, including Shias, Sunnis, Kurds and Christians during its advances in the violence-torn Arab state. 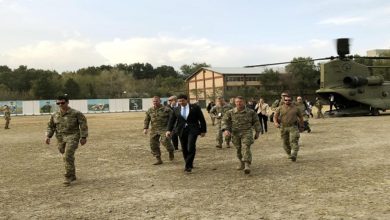 US Secretary of Defense Mark Esper unconventional visit to Iraq

Al-Maliki: Iraq Supports the Will of the Syrian People

Ammar Al Hakim: The Movement Won Because it is the First Winning Political Entity in the Elections