â€œThey have to tell the Bahraini government we are going to suspend your membership because you violated all these human rights and the freedom of assembly, [and] the right to expression, and for this reason people were killed, people were tortured, people were jailed, opposition leaders are still in jail, teachers, physicians are in jail,â€ President of the Bahraini Medical Association Osama Alaradi said in an interview with Press TV on Friday.

The Bahraini revolution began in mid-February 2011, when the people started holding mass demonstrations.

Dozens of people have been killed in the crackdown, and security forces have arrested hundreds, including doctors and nurses accused of treating injured revolutionaries.

â€œThey had been trying to suppress the Bahraini people for the past actually two or three decades but they were not able to, because Bahraini people are determined to achieve their rights, their basic rights,â€ Alaradi said.

He further argued that, expressing concern over the situation in Bahrain is not enough and as an international organization, the UN, should take action with regards to the violations taking place in the kingdom.

â€œI know they are admitting that the Bahraini government is violating the basic rights of assembly, [and] freedom of expression, but just to say that we are really concerned about that and this may aggravate the situation is really not enough at all.â€ 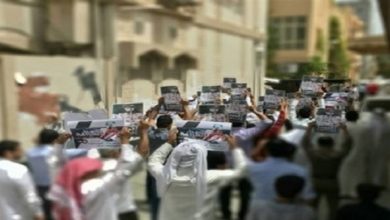