Bahrainis have taken to the streets across the tiny Persian Gulf kingdom to mark the tenth anniversary of the popular uprising against the ruling monarchy.

The rallies took place on Saturday night, on the eve of the 2011 uprising’s anniversary, with the participants chanting slogans against the Al Khalifah regime and King Hamad bin Isa Al Khalifah.

The demonstrators also carried pictures of the uprising’s leaders and martyrs as well as placards vowing resistance until victory.

They also blocked the streets by setting up bonfires despite heavy security and the presence of policemen.

Bahrain’s main opposition group, the al-Wefaq National Islamic Society, posted the pictures of the rallies on its Twitter account.

The protesters held handwritten posters with messages of solidarity with the families of the martyrs and condemnation of the regime’s repression.

Additionally, the Coalition Youth of 14 Feb Revolution in a statement called on all Bahraini groups and masses to close ranks in order to change the ruling political regime in Manama.

Demonstrations in Bahrain have been held on a regular basis ever since the popular uprising began on February 14, 2011.

The protesters demand that the Al Khalifah regime relinquish power and allow a just system representing all Bahrainis to be established.

They have also been complaining about widespread discrimination against the country’s Shia majority.

Manama has responded to the anti-regime protests with an iron fist. The authorities have detained rights campaigners, broken up major opposition political parties, revoked the nationality of several pro-democracy activists and deported them. 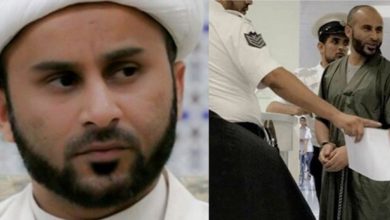