US President Donald Trump has declared as “dead” so-called peace talks with the Taliban, prompting the militant group to declare war against American forces in Afghanistan, a development that seems to only prolong the 18-year occupation of the country.

Speaking to reporters at the White House on Monday, Trump said the US military was already pounding Taliban positions in Afghanistan with unprecedented fire.

“They are dead. As far as I am concerned, they are dead,” Trump said, when asked about the long-running talks with the militant group in Qatar.

The talks produced a draft agreement last week that included a substantial US military drawdown from the country after 18 years of occupation, putting in sight an end to what has become the longest war in America’s history.

However, the prospect of peace in Afghanistan collapsed on Saturday, when Trump said he had called off a secret meeting with Taliban leaders in Camp David, outside Washington to discuss the deal.

The decision, Trump said, was his response to a deadly bomb blast by the Taliban, which killed 12 people in the Afghan capital of Kabul on Thursday, including an American soldier.

Trump put another nail in the coffin of the draft agreement, saying his military commanders had already stepped up war against the militant group to the highest levels in a decade.

“Over the last four days, we have been hitting our Enemy harder than at any time in the last ten years!” he wrote in a tweet.

‘US will regret walking away from talks’

Taliban spokesman Zabihullah Mujahid said Tuesday that the militant group tried dialogue as one of the two ways available to end the conflict, warning that the other option is armed conflict.

“We had two ways to end occupation in Afghanistan, one was jihad and fighting, the other was talks and negotiations,” Mujahid told AFP.

“If Trump wants to stop talks, we will take the first way and they will soon regret it,” he added.

Trump’s comments echoed those by Secretary of State Mike Pompeo, who said a day earlier that the talks were “dead” because the Taliban “tried to use terror to improve their negotiating position.”

He, too, noted that America’s military operations in Afghanistan were now back on full throttle.

“We’ve killed over a thousand Taliban in just the last 10 days,” he claimed.

US likely to ramp up operations against Taliban: Top general

Meanwhile, the United States Central Command (CENTCOM), which oversees Washington’s military operations in Afghanistan, said the military was likely to accelerate the pace of its operations against the Taliban.

Marine General Kenneth McKenzie, the head of CENTCOM, said during a visit to Afghanistan that the militants overplayed their hand in the negotiations by resorting to violence.

Seemingly unrepentant, the Taliban, who are today in control of more territory than at any time since 2001 when the group’s rule ended over the country, said Sunday that more American lives would be lost in Afghanistan if the peace talks stop.

McKenzie declined to comment on the Taliban statement but said US troops would not hesitate to hit back.

“We’re certainly not going to sit still and let them carry out some self-described race to victory. That’s not going to happen,” McKenzie told reporters during a stop at Bagram Airfield in northeastern Afghanistan on Monday.

The CENTCOM chief pledged a “spectrum” of attacks against the Taliban, which will also include airstrikes and raids involving Afghan commandos.

Any increase in US military action would correspond to an acceleration of Taliban attacks, he added.

According to a United Nations report that came out on September 3, airstrikes by US-led foreign forces and Afghan aircraft in Afghanistan reached 506 between May 10 and August 8, around 57 percent increase from the same period in 2018. 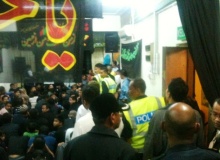 Taliban and ISIS create perfect storm of bloodshed in Kabul