Probe into activities of Saudi ambassador in Pakistan demanded due to surge in hatemongering sectarianism and violent extremism.

Probe into activities of Saudi ambassador in Pakistan

Saudi Arabia is trying to take revenge from Pakistani nation of its defeat in public diplomacy and PR campaign against Turkey, Malaysia, Qatar and Iran.

For instance, Pakistanis, Turks and Iranian consider tombs and shrines sign of reverence for saints but Saudi monarchy and their Wahhabi clerics have demolished tombs or shrines in Makkah and Madinah.

They perpetrated this blasphemy or sacrilege of Islamic sanctities.

In Pakistan, U.S.-allied Saudi Wahhabi monarchy has been funding terrorists since long. The terrorists have attacked churches and temples, let alone Islamic shrines, mosques and Imam Bargahs and Muslims.

Terrorism and extremism in Pakistan cannot end due to these reasons

Now, Saudi ambassador has held meetings with clerics and after that they have launched hate campaign and also resorted to violent extremism and bigotry.

Due to Saudi monarchy’s’ isolation in rest of the Muslim world, Saudi regime is taking revenge through terrorists.

Western world and particularly non-Muslims should know that al-Qaida and Daesh (ISIS) also follow Wahhabism and Saudi monarchy and clerics.

Saudi Wahhabi monarchy has bought Deobandi sect in Pakistan. Since then, Deobandi sect has deviated Hanafi interpretation and follow Wahhabism.

Their clerics such as Ghulamullah Deobandi, Panj Piri Deobandi, Hussain Ali Deobandi who claim them Sunni Hanafi had given decrees against Sunni Hanafi Brailvis and declared them heathens and pagans.

Saudi monarchy continues to violate Islamic sanctities but even then, Saudi monarchy remains darling of U.S.-led West who make tall claims on human rights but restrict to lip service.

Pakistani nation hates U.S.-led West’s hypocrisy on human rights because of its unqualified support for Israel and Saudi regimes.

Together, they have turned Pakistan a hell for peace loving tolerant nation who always demonstrated decency and politeness unlike sectarian bigots whom West-Saudi alliance created during so-called Afghan jihad. They continue to pose threat to Pakistan. 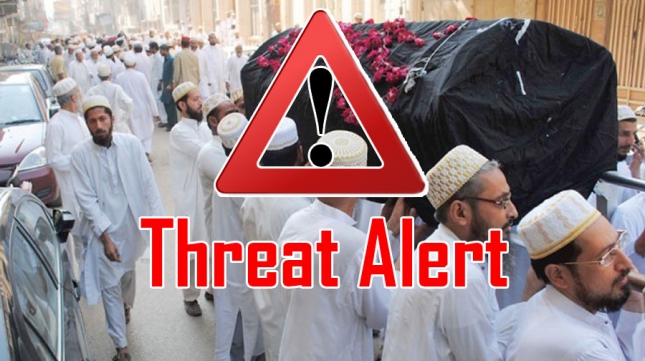 Threat Alert! A Faction in Karachi the Next Target of Takfiri Terrorist

Punjab government to allocate funds for JuD seminaries after takeover