Southern Yemen has recently witnessed the escalation of tensions. Last week, the leaders of the Southern Transitional Council (STC), a United Arab Emirates-backed separatist group seeking to split the south of Yemen from the north, held a meeting in southern city of Aden to protest what they described “rampant corruption” of the officials of the government of Saudi-backed Abd Rabbuh Mansour Hadi, the resigned and fugitive president of the country. The outcome of the meeting was a declaration of a state of emergency and an ultimatum.

The leaders of the south called for the resigned president to remove Ahmed Obeid bin Daghr, the prime minister of the cabinet, or face overthrowing for the corruption of the administration that resulted in a “deteriorating economic, security and social situation never before witnessed in the history of the south”.

The STC said it handed an ultimatum to Mansour Hadi, telling him to dismiss the PM and his cabinet until Sunday, January 28. But he rejected the deadline and banned the public gatherings ahead of Sunday’s zero hour.

When the deadline was over, the situation in the country’s south became tense. According to International Committee of the Red Cross, at least 36 people have been killed and 185 wounded in Aden since Sunday due to violent clashes between the Southern Resistance Forces (SRF), the armed wing of the STC, and the Mansour Hadi’s forces.

The STC was formed in May last year on the strength of the UAE support. One of the council’s leading objectives was to work towards the split of south from north of Yemen. Such an administrative parallel council in the face of the resigned government, which is propped up by Saudi Arabia, has put on a collision course Riyadh and Abu Dhabi, two parties that over the past three years led the war against neighboring Yemen.

The STC is widely attempting to get bin Daghr removed. Historically, the south has looked at Saudi Arabia as an enemy and aggressive neighbor. In the 1960s, Saudi kingdom went to great lengths to defeat the southern secessionists. Meanwhile, in the recent months, the Saudi and Emirati goals in Yemen moved towards further contradiction and confrontation. Now they are touching their climactic point, leading to fierce fight of the proxies. Many people from the other southern provinces, the reports point out, are moving to Aden to protest against Mansour Hadi and the operating cabinet. Aden, the temporary capital of Mansour Hadi’s government, is subjected to tight security measures by the resigned government. On the opposite side, the forces of “Security Belt”, a force organized, trained, and armed by Abu Dhabi, are reportedly stationed in Al-Huriyah Square of Khormaksar district of Aden.

In the meeting, the south’s separatists threatened that if the fugitive president refuses to bow to their demands, they will forcefully oust the government of bin Daghr. The Saudi-led Arab military coalition stated that it was closely following the situation in Aden. It called on all of the social and political groups to exercise restraint and go to negotiations for de-escalation. Reports maintained that Mansour Hadi’s forces have been deployed to areas leading to the presidential palace in Al-Ma’ashiq district of Aden. The interior ministry Friday evening imposed a ban on gatherings and anti-government protests across the southern city.

While the anti-government protests are underway, bin Daghr has accused the southern sides of organizing a coup against the government. He urged the Arab coalition to help save Aden. He asked the UAE to make a clear decision on the issue.

In the meantime, Hassan Baum of the STC has called on the southern Yemenis to do their best to confront the “foreign occupiers.” Calling the troops of the Arab coalition the occupying forces, he said that the attempts to push them out of the country are meant to settle the crisis and internal problems. He decided that a Yemen without foreign forces will have fewer troubles in the future.

Speaking on condition of anonymity, officials told the AP news agency that Yemeni Prime Minister Ahmed Obaid Bin Daghar is about to flee the country as STC militants entered the presidential palace in Aden.

The clashes of the Saudi-backed forces with those supported by the UAE were highly expected because Saudi Arabia once recognized itself as holding a sway in northern Yemen. But its efforts to bring this image to reality have failed and Riyadh sustained heavy defeats there. The kingdom then headed to the south, the part of Yemen the UAE deemed its own sphere of influence. Now there are growing concerns about a military rebellion of the southerners, as the STC forces, commanded by Aidarus al-Zoubaidi, are struggling to seize control of the city. There are burgeoning fears of a civil conflict in the south, especially that reports noted that the SRF have wrested an office of the government in the Port of Aden, where a temporary military base is established by Mansour Hadi. Outlets also noted that the SRF have detained dozens of the pro-government fighters. Other reports also talked of SRF’s heavy shelling of the presidential complex in Crater district of Aden.

When it comes to seeking the root causes of the escalation in Aden, some point fingers at Saudi Arabia and the UAE which are believed to be colluding to split Yemen. Abu Dhabi and Riyadh might be purposely accentuating their disputes over the spheres of influence in a bid to embolden their local allies to clash. Intensified battles will prepare the ground for implementation of the partition scenarios. For some analysts, this complexity is devised by Saudi Arabia and the UAE to escape the crisis amid an ongoing campaign which made Yemen a quagmire for their forces.

Yemen split plan dates back to 2014, the year when the Saudi-dominated (Persian) Gulf Cooperation Council proposed an initiative for peace in Yemen according to which the country should be divided into six federal regions. At the time, the fresh government of Abd Rabbuh Mansour Hadi approved the proposal. Hadhramaut and Aden provinces were also part of the roadmap.

Still, despite the possibility of the split scenario, the more possible issue is that there is a serious gap emerging between Abu Dhabi and Riyadh. Contradictory strategies and objectives of the two allies and Mansour Hadi’s sacking of the UAE-loyal figures in Aden in April last year both feed a movement of Aden situation to a volcanic point. 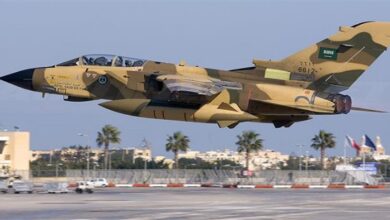