With the recent call by the Northern State Governors Forum (NSGF) on the Islamic Movement in Nigeria (IMN) under the leadership of His Eminence Sheikh Ibraheem #Zakzaky to participate in the Judicial Commission of Inquiry (JCI) that was set up by the Kaduna state government on the brutal massacre of close to 1000 Shia Muslims last December in Zaria, Kaduna state, it is important to outline the reasons why the IMN took a firm decision to boycott the Commission since the composition of the commission is not credible and impartial.

●Immediately after the brutal #ZariaMassacre the Kaduna state Governor Nasir Elrufai made a state-wide broadcast where he indicted the IMN on the Zaria massacre and blamed it on all that happened. He deliberately refused to acknowledge the massive loss of valuable lives that included hundreds of women and children and the destruction of properties belonging to IMN and its members.

●Immediately after the brutal Zaria massacre the Kaduna state Governor Nasir Elrufai destroyed all the physical structures that were important evidences of the inhuman massacre and quickly evacuated all the rubbles and empty shells of the ammunition used in the massacre. To destroy the evidences of a war crime is a war crime itself.

●Some of those Shia Muslims especially the 191 dead bodies that the Kaduna state Governor Elrufai collected from the NADepot and buried in the Mando mass grave were buried alive as there was no competent doctor that certified them dead.

●After the brutal Zaria massacre the Kaduna state Governor Elrufai charged 266 survivors of the massacre who were imprisoned with trump-up charges of “criminal conspiracy, unlawful assembly, illegal possession of weapons and Disturbance of public peace”. Then after he was forced to confessed the existence of the mass grave due to the specter of facing the International Criminal Court (ICC), he now manufactured a “dead soldier” and charged 256 IMN members with “Culpable homicide” and demanded the death sentence for them.

And after the Zaria massacre the Nigerian regime launched massive smear campaigns of calumny and demonization against IMN and Shia Islam in Nigeria using local proxies and dragged Nigeria into the #Saudi-led anti-Shia alliance.

●A Nigerian radical Wahhabi cleric, Sheikh Abubakar Gero Argungu, recently said in a secret meeting in Yauri, Kebbi state, that before Nigerian President Buhari went to #Iran for the Gas producing state summit, they met him and warned him of “the dangers of Iran and Shia Islam”. When President Buhari returned from Iran he called them and told them what they said was true. That was where the plot for the Zaria massacre was incubated and hatched. The tape of this statement is available.

●Some of the victims of the Zaria massacre especially those who were burnt alive were denied Passport for them to be flown abroad for further medical attention by the order of the Nigerian regime to the Immigration services. Imagine the hatred and inhuman wickedness that drove these war criminals to take such an inhuman decision!

Finally, with the above submission I conclude that the Judicial Commission is a kangaroo Commission formed by those who actively participated and executed the brutal slaughter of close to 1000 defenseless and unarmed Nigerian civilians and dumped their dead bodies in mass Graves. The internal Judicial mechanism in Nigeria as presently constituted will never give justice to the victims of the Zaria massacre because both the Nigerian President Buhari and Kaduna state Governor Elrufai are all implicated in the Zaria massacre. 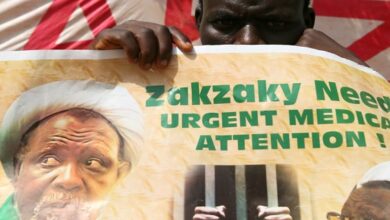