Speaking at the Third International Conference on Wilayah [Guardianship] in Ahvaz, Dr. Muhammad al-Tijani al-Samawi, a renowned Tunisian Shi’a scholar, said this conference is a good opportunity for scholars from various Islamic countries to participate in the strengthening of solidary among Muslims.

Speaking on the eve of Eid al-Ghadir, a Shi’a Islamic holy day which celebrates the divine appointment of Imam Ali as the successor of the Prophet Muhammad, he said that said many of our Sunni brothers do not have enough information about the events of Ghadir and its nature and for this reason, officials of the Islamic Republic of Iran must invite scholars to international conferences like this one to take important steps towards strengthening the solidarity of the Islamic world.

The renowned convert from Sunni to Shi’a Islam explained the event of Ghadir al-Khum and stated that the Quranic verse: “Oh Apostle [Muhammad]! Communicate that which has been sent down to you from your Lord, and if you do not, you will not have communicated His message…” [5:67] was revealed after Hajjat al-Wida’, the Prophet Muhammad’s farewell pilgrimage.

“The importance of the divine command to appoint a successor is shown by this verse,” he said.

Dr. al-Tijani said after the revelation of “Ayat al-Tabligh,” [the Verse of Publication], the Prophet called his companions and Hajj pilgrims to gather at the pond of Khum, and while he stood beside Ali ibn Abi Talib, he went up to the top of the pulpit and spoke to the 100,000 plus people gathered in the heat of the Hejaz desert.

The author of “Then I was Guided,” stated that in his sermon at the pond of Khum, the Prophet Muhammad made a monumental statement in the history of Islam, explaining: “The Messenger of God repeatedly stressed to his companions the importance of his message to them and clarified it saying that after all the companions acknowledged his guardianship and truthful mission, he introduced Ali ibn Abi Talib as his successor and caliph after him and said: ‘Of whomsoever I had been Master, Ali here is to be his Master.’”

The Tunisian Sunni scholar stressed on the hypocrites’ efforts to distort reports of this great event, saying that after the Muslims happily congratulated the Commander of the Faithful, the hypocrites behind the scenes sought to prevent the implementation last the Prophet’s last command. “Unfortunately, the hypocrites’ actions during the expansion of Islam led to most Muslims being unfamiliar with the events of Ghadir al-Khum, which has continued until today,” he said.

Dr. al-Tijani stressed the need to convey the message of Ghadir to the people of the world, saying that many people, due to hypocrites’ oppression against Islamic ummah throughout history, our Sunni brothers have not heard the message of Ghadir. “Thus, we must raise awareness of this event among the people,” he said.

At the end of his speech, he appreciated Ayatollah Sayyed Mohammad-Ali Mousavi-Jazayeri for establishing the International Conference on Guardianship, saying that the message of Ghadir and its truth will end all conflicts in Islamic society.

Protests Continue in US over Death of Black Man 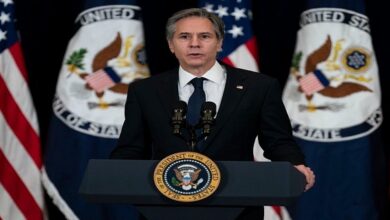