Egyptian President Abdel-Fattah al-Sisi on Friday implied that Egypt has not sent ground troops to fight in a Saudi-US-led military aggression on Yemen. “Egypt is only participating in ‘Operation Decisive Storm’ with air and naval forces,” Al-Sisi said in a speech at a military academy in the eastern Kafr al-Sheikh city.

“An announcement will be made if any other forces were deployed in the operation,” he asserted. Al-Sisi’s visit to the military academy comes two days after two cadets were killed and three others injured when a bomb was detonated near a bus boarding a group of cadets.

Saudi Arabia and its Arab allies have been since March 25 pounding Yemeni cities killing and injuring hundreds of people.

London Mayor Khan compares Trump’s rhetoric to that of ISIS 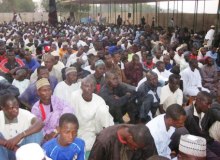 Egypt’s Al-Azhar University has fired some 300 students for being associated to the ISIL terrorist group.

US Airstrikes Kill Hundreds of Civilians in Syria and Iraq