US President Donald Trump has said he wants Congress to pass legislation mandating a jail sentence of at least one year for protesters who burn the American flag.

“We ought to come up with legislation that if you burn the American flag you go to jail for one year,” Trump said Saturday at a sparsely-crowded campaign rally in Tulsa, Oklahoma – his first rally in three months.

The Republican president renewed his call to make acts of desecrating the flag a punishable offence while pointing at two GOP senators, Jim Inhofe and James Lankford, in the crowd.

“We ought to do it. We talk about freedom of speech… but that’s desecration,” he doubled down.

Over the past few weeks, some demonstrators have set American flags on fire and toppled a number of Confederate statues at nationwide protests over racism and police brutality.

The death of George Floyd, an unarmed African-American man who died in police custody late last month, has triggered massive protests across the country.

Burning the flag is not unlawful in the United States.

The US Supreme Court ruled in 1989 that the act of burning an American flag is constitutionally-protected free speech under the First Amendment.

In a separate decision in 1990, the high court ruled that federal legislation criminalizing flag-burning violate the US Constitution.

However, Trump has repeatedly argued that the act should not be protected by the First Amendment.

During a conference call with governors earlier this month, the president said desecrating the flag was a “disgrace” and pledged support for an “anti-flag burning” statute.

At the Tulsa rally, Trump also blasted what he called “left-wing anarchists” for removing statues of historical figures like Thomas Jefferson and Christopher Columbus. 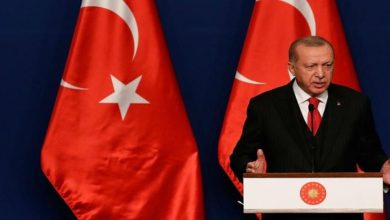 Turkey is planning to establish a military base in Libya: Media report