al-Shehab , a Leeds University PhD candidate focused on healthcare and mother of two was on holiday in Saudi Arabia in January 2021 and had planned to return to the United Kingdom when she was detained, according to the Freedom Initiative, a Washington, DC-based human rights organisation.

Al-Shehab was originally sentenced to six years in prison over tweets she posted calling for rights in the kingdom. But on an appeal last week, Saudi Arabia’s Specialised Criminal Court increased the sentence to 34 years, along with a 34-year travel ban.

She may not be alone: since going public about Al-Shehab’s sentencing on Friday, The Freedom Initiative’s Saudi case manager Bethany Al-Hudairi said she’s heard credible reports of several others whose sentences were also increased dramatically during recent appeals in Saudi Arabian courts.

Riyadh, UAE, Egypt are after disarming Palestinians rather than truce 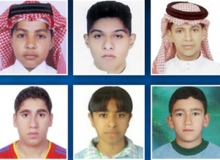