The United States has reportedly expanded charges against two former Twitter employees and another individual accused of spying for Saudi Arabia on dissidents.

The announcement was made after reports that the USdropped charges against them.

It was not clear why the US wasinitially pushing to have the case against Ahmad Abouammo and Ali Alzabarah, dismissed.

A Saudi citizen named Ahmed Almutairwas also implicated as the recruiter to convinceAbouammo and Alzabarah to spy on Saudi dissidents.

Abouammo and Alzabarah were allegedly using Twitter credentials to collect email addresses, phone numbers, IP addresses, and other data from the accounts of the critics of Saudi Crown Prince Mohammed bin Salman.

The men were charged last fall with acting as illegal foreign agents, and the FBI released wanted posters for two of them, believed to be residing in Saudi Arabia.

Abouammo, a US citizen, is reportedly in custody after being arrested in Seattle, where he was then working for Microsoft, in November.

Twitter said back then that it “limits access to sensitive account information to a limited group of trained and vetted employees,” and that it understands “the incredible risks faced by many who use Twitter to share their perspectives with the world and to hold those in power accountable. We have tools in place to protect their privacy and their ability to do their vital work. We’re committed to protecting those who use our service to advocate for equality, individual freedoms, and human rights.” 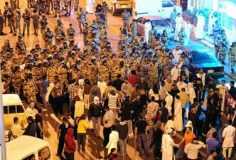